This Day In Beatles History... 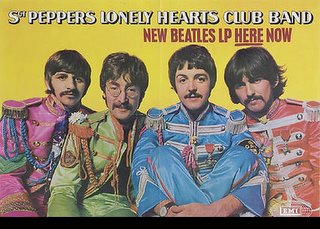 Unfortunately, Beatlology magazine does not send out these emails anymore, but I saved previous years emails and will post some of them here. Today is a signficant day because it was the official release date of Sgt. Pepper's Lonely Hearts Club Band in the U.K. (All credit goes to Beatlology for maintaining this database--thanks for your research!)

These events occurred on this day in Beatles history...

1963 - The Beatles tape the second and third "Pop Go the Beatles" radio programs for the BBC. The second program, featuring the guests the Countrymen, is broadcast on June 11 and has The Beatles performing "Too Much Monkey Business," "I Got to Find My Baby," "Youngblood," "Baby It's You," "Till There Was You," and "Love Me Do." The Beatles, now playing 25-minute sets on package tours, were only able to play their Lennon-McCartney hits in live performance, so they used these radio programs to play some of the cover versions that previously made up a large part of their live performance repertoire. The third "Pop Go the Beatles" is broadcast on June 18, with guests Carter-Lewis and the Southerners. On that show The Beatles perform "A Shot of Rhythm and Blues," "Memphis," "A Taste of Honey," "Sure to Fall (in Love With You)," "Money," and "From Me to You." Recorded at BBC Paris Studio, London. A number of recordings from this day are included on the 1994 Beatles double-CD "Live at the BBC." From show No.2, "Youngblood" (Disc one, Track eight); "Baby It's You" (Disc one, Track 14); and "I Got to Find My Baby" (Disc two, Track 29). From show No.3, "Sure to Fall (in Love With You)" (Disc one, Track 10). The Beatles perform for two "houses" with the Roy Orbison tour after recording two radio shows, at the Granada Cinema, Tooting, London, in the evening.

1964 - The Beatles in the recording studio, Studio Two, EMI's Abbey Road Studios, London. Recording songs for the non-soundtrack side of their album "A Hard Day's Night," as well as completing the songs for the "Long Tall Sally" EP. They recorded 5 takes of "Matchbox" (for the EP), 8 takes of "I'll Cry Instead" (for the album), 6 takes of "Slow Down" (for the EP), and 16 takes of "I'll Be Back" (for the album). American Carl Perkins, composer of "Matchbox," was on a promotional tour in the U.K. and visited The Beatles' recording session, getting the chance to see them recording his song. Perkins was one of the biggest influences on The Beatles. "The Beatles Anthology 1" includes Takes 2 and 3 of "I'll Be Back" from this recording session (Disc 2, Tracks 17-18). The Beatles and Tony Sheridan single "Sweet Georgia Brown/Take Out Some Insurance On Me Baby" (Atco 6302) is released in the U.S.

1966 - The Beatles in the recording studio, Studio Two, EMI's Abbey Road Studios, London, recording sound effect overdubs for "Yellow Submarine," a 12-hour session. John blows bubbles in a bucket of water and shouts out "Full speed ahead Mister Captain!" (from inside an echo chamber). Other persons participating in making the barrage of noises heard on "Yellow Submarine" (as well as those edited out of the final song) are the other Beatles, Brian Jones, Marianne Faithfull, Pattie Harrison, George Martin, Neil Aspinall, Mal Evans, John Skinner, and Terry Condon. Then, Mal Evans pounds on a huge bass drum strapped to his chest, marching about the studio as the others follow behind (conga-line style) singing "We all live in a yellow submarine" (Lewisohn). The overdub that takes the most time and effort, however, is one that will never make it onto the finished song. This is a spoken passage narrated by Ringo that opens the song and fades into the acoustic guitar intro (the whole bit lasting 31 seconds) but it was cut from the final version.

1969 - John and Yoko, on the last day of their Montreal, Canada, bed-in for peace, record "Give Peace a Chance" with a roomful of people, including: Tommy Smothers, Timothy Leary, Rabbi Abraham Feinberg, Derek Taylor, Petula Clark, and members of the Canadian Radha Krishna Temple. The recording is credited to "The Plastic Ono Band." Although the songwriting credit is listed as Lennon-McCartney, Paul had nothing at all to do with the song, but John had not yet reached the decision to abrogate his long-standing agreement with Paul about sharing songwriting credits regardless of the degree of contribution from the other.

1971 - John Lennon records "Do the Oz," crediting it to the Elastic Oz Band. John also records a demo of "God Save Us," onto which Bill Elliot will record his vocal. John Lennon, having obtained a 9-month U.S. visa, flies to New York with Yoko in an attempt to find and gain custody of Yoko's daughter Kyoko.

Maintained by Beatlology, Inc. publishers of Beatlology Magazine, the magazine for fans and collectors around the world - www.beatlology.com
Posted by child of nature at 10:29 AM