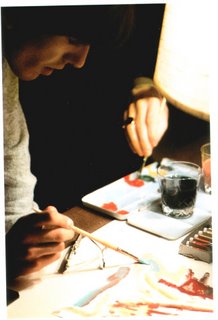 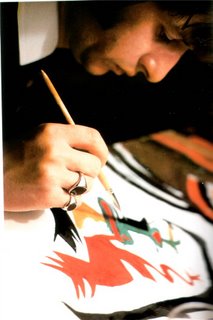 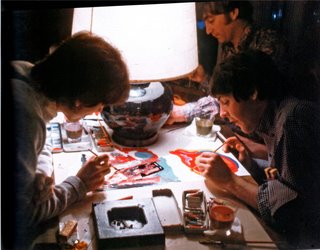 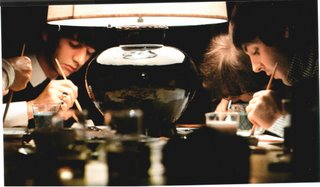 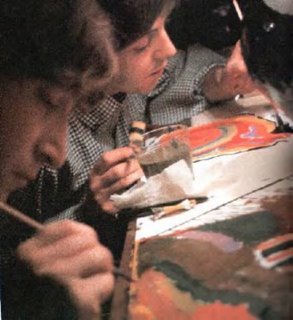 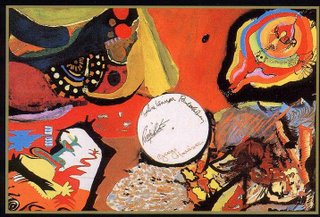 While in Tokyo (at the Hilton where they were staying), the Beatles spent their time in between concert appearances creating a collaborative work of art that was not musical in nature. Considered to be the only painting created by all four of them, the finished work was entitled Four Images of a Woman, and was presented to the president of their Japanese fan club as a gift. According to Robert Whitaker, the four had never appeared so relaxed as they did while painting together.

"I never saw them calmer, more contented, than at this time. They were working on something that let their personalities come out. I think it's the only work they ever did together that has nothing to do with music. They'd stop, go and do a concert, and then it was, 'Let's get back to the picture.'....

There were no girls around, no groupies, they were all phoning their wives and girlfriends, listening to Revolver, and smoking a joint or two while they were painting." Robert Whitaker

I've always enjoyed this moment in the Beatles career. They were in the middle of one of their most pivotal, controversial years as a group. They had created the revolutionary album Revolver, embarked on a tour which illustrated their lack of enthusiasm for the trappings of Beatlemania and touring in general, will soon accidentally snub Imelda Marcos, and would also face their greatest challenge yet--the "Bigger than Jesus" uproar in the U.S. With the experimental music they were creating in the studio, it must have been very difficult to take the stage and sing the same songs night after night; many of the songs were far removed from what they were creating at the time.

These pictures illustrate the calm within the eye of the hurricane. They also show us brotherhood and camaraderie among four friends.

Coming soon: Celebrating the 40th anniversary--screen captures from their Budakon concerts.
Posted by child of nature at 1:22 PM

I love what that painting represents too :)

I was just thinking about these series of pictures the other day. They look like they are having so much fun...oblivious to what was to lie ahead in the Phillipines, and the US....

lovely
I've always wanted to know where the images of them painting came from, what the painting eventually looked like :)

hello :) do you mind letting me know what magazine you scanned these photos from, I'd really like my own copy of the one with John
thanks in advance!

Er, sorry, but why does Ringo draw with the right hand? I thought he's a leftie, just like Paul!

They look so serious and their works are very wonderful!
jr bridesmaid dresses