Fly High Like A Bird Up In The Sky 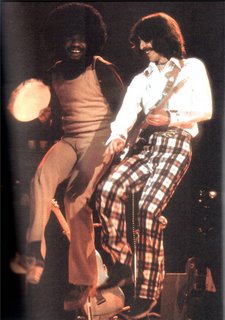 Yesterday, the Beatles inner circle lost another of their closest and dearest members. A true "Fifth Beatle", Billy Preston passed away after a long illness at the age of 59. The genuine love and respect the Beatles had for Billy was always evident. Not only did they turn to him to enrich their recordings with his unique style, they also recognized the postive energy he brought with him to those sessions. Mr. Preston has the distinction of being the only session musician credited on a Beatles' single (credited on "Get Back" and "Don't Let Me Down"as "The Beatles with Billy Preston")--John and George even wanted Billy to become an actual member of the band. His work with the Beatles together and solo is quite impressive, but his session work runs like a history of rock and roll roster--Little Richard, Ray Charles, The Rolling Stones, Aretha Franklin, Bob Dylan, Jefferson Airplane, etc., and lastly, his appearance on the latest Red Hot Chili Peppers album. He had a fairly accomplished solo career as well, co-writing one of the most famous songs of the 20th century, "You Are So Beautiful" as recorded by Joe Cocker. "Nothing from Nothing" and "That's The Way God Planned It" will always be soul staples.

Yesterday, I spent some time listening to a cd of George's 1974 tour appearance in Seattle, and it was Billy's lively and moving performances that stood out. Sure, George's voice was a bit rough and he changed words of Beatles' songs around, but some performances weren't as bad as the critics indicated at the time. I imagine seeing George and Billy together on that tour would have been very enjoyable, "dark hoarse" or not. I suggest watching Billy in the Let it Be film, the Concert for Bangladesh, or the Concert for George as a fitting tribute. When he gets up and dances around during the Bangladesh concert, it's like the spirit has truly descended upon the place! One can not help but feel it, too.

So, in honor of a gifted musician with a brillant smile, a true friend to the Beatles and their fans, rest in peace, Billy. We won't forget you.
Posted by child of nature at 12:30 PM