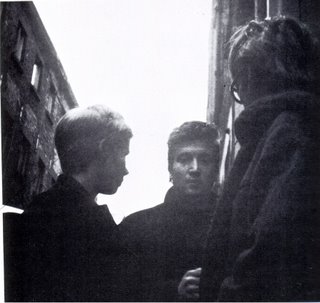 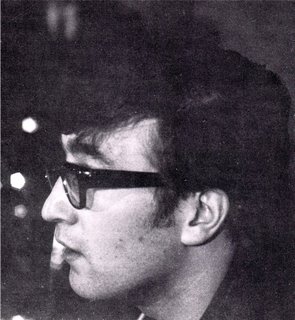 Some photos I scanned from the 1981 book, The Macs: Mike McCartney's Family Album. The first is a picture of Astrid, John and Stu outside the Cavern, shortly before Stu's death. Mike sent a copy of this photo to John and Yoko when they were living in New York; the second is a candid photo of John in his horn-rimmed glasses. (click to enlarge)

I often think of the sudden and tragic losses that permeated John's short life. There is no way this could not have a deep and lasting affect on his art and psyche. So many people he genuinely loved left him, either through abandonment or death. It seems so fashionable now for people to scrutinize and judge John, perhaps more harshly than others because he has been placed on a pedestal for so long. I have encountered two people recently who proceeded to tell me they no longer liked John because of things they had read about him. I retorted that they shouldn't believe everything they read, especially if it's in books by certain vultures who pose as biographers. John was honest in the way he lived his life. He told us what we needed to know. And all we truly need to know comes through in his music, poetry, lyrics, art and candid interviews through the 40 short years of his life. He was complex, and by no means perfect, but he is being judged incredibly unfairly for just being a human being. Albeit a gifted and special human being...

"I can't remember anything without a sadness so deep that it hardly becomes known to me."--John Lennon, in a letter to Stu Sutcliffe.
Posted by child of nature at 9:53 PM