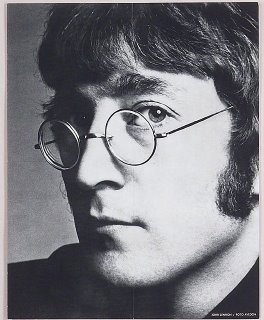 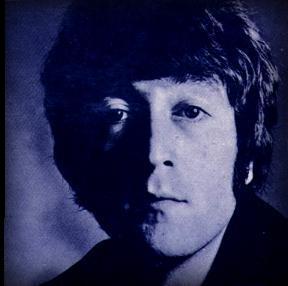 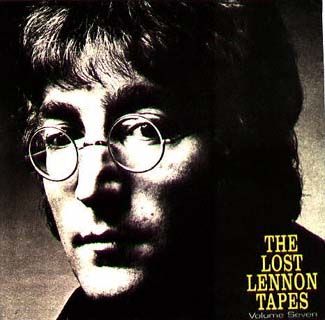 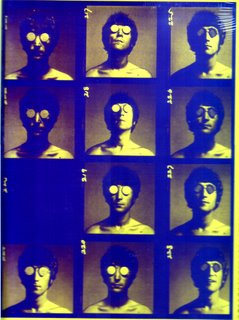 Legendary photographer Richard Avedon was commissioned to photograph the Beatles for the January 9, 1968, issue of LOOK magazine. One by one George, Ringo, John and Paul (in that order) filed into the Chelsea penthouse studio for the session. A sink full of flowers, 12 live doves, and de rigueur costumes awaited them as Richard's 15 year old son played Jefferson Airplane records in the background to enhance the mood. These historic photographs are the psychedelic portraits now mostly associated with the 1 album and cd (the deluxe vinyl edition includes 4 large individual photographs). Avedon also took black and white portraits and group photos, one of which was a 4 page spread in the LOOK issue, another which became the artwork for the Capitol Love Songs LP. The psychedelic portraits and b&w group photo could be ordered in poster form from LOOK, too.

Here are some portraits of John from this session that did not appear in the magazine. The large photo at the top is one of my all-time favorites of John--it was recently up for auction along with portraits of the other Beatles from this session as a part of the Apple vault. I have the picture as my avatar at the SH.tv forum. The contact sheet came from the back of the Bag Records release of volume 33 of the Lost Lennon Tapes. (Click to enlarge.)

I am currently working on an essay exploring Lennon's views on mysticism and metaphysics, and how these emerged in his songwriting throughout his career. When it is complete, I will be posting it here. I would certainly appreciate your feedback to any entry.

As I type this entry I am listening to The Soft Machine, Volume 2--one of my favorite psychedelic albums from an intelligent, experimental and versitile group. If you haven't heard them, check them out--only if you like free-form jazz and Syd Barrett. It's an aquired taste...
Posted by child of nature at 12:45 AM

I'll definitely be looking forward to that essay :)

I jokingly made one of those Avedon photos into a John/Harry Potter-esque icon...

I have this black and white print of John Lennon signed by Richard. Would anyone know what it is worth?

It is worth a lot. The Avedon book with his autograph is between $1000 and $4000. I would check out as much as possible and find the best way to preserve the photos quality. Good for you!