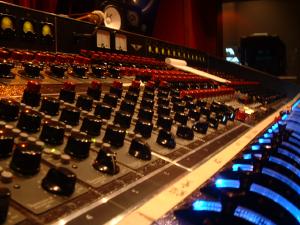 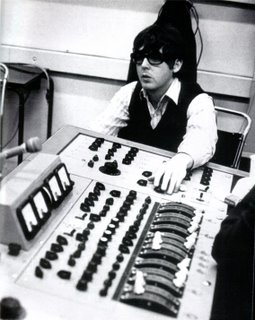 On Friday night, I attended a launch party at Sixteen Ton Studios in Nashville, Tennessee--an event for host Robert Reynolds to display his large collection of vintage concert posters, ranging from Hank Williams, Sr. all the way to his own bands the Mavericks and Swag. Most impressive were Patsy Cline's boots, Hank Williams' razor, Buddy Holly's guitar strings, and a mock-up for a Skeeter Davis promo poster. I met many talented artists and friendly people who made me, as I am a Music City outsider, feel quite welcome.

I toured the studio, and marvelled at the impressive gear--from the 1969 Mellotron (with the same tapes as the one John owned) to the Hofner Club 40 (just like John's old guitar that Paul would sometimes play), Hammond organ, and most impressive of all--the console. The console took three years to build, and it was built to replicate what was used by Brian Wilson when he recorded Pet Sounds. Although the console employs modern technology, all the knobs are vintage, and it is a tube/transistor hybrid. Some of the faders on the console were actually from Abbey Road Studios at the time when The Beatles recorded there! I was ecstatic to be that close to something The Beatles, George Martin, Geoff Emerick, Norman Smith, and others had used to perfect that magic created by the greatest band in history. It was a beautiful moment. The pictures above are of Paul at the Abbey Road console with the faders prominently featured, and a picture of the console at Sixteen Ton Studios. If you would like more information about the studio, please visit their MySpace page: Sixteen Ton Studios

I met two very unique singer/songwriters at the party whose music I thoroughly enjoyed. Please check out their MySpace pages to hear a sampling of their work and read more about them.

James Moore : What a voice! Very sensitive--a storyteller, yet introspective. He has a sound like a Ben Folds or Jeff Tweedy at times. Amazing lyrics and stellar instrumentation. His recordings are home demos that sound like they were cut in a professional studio. A very humble guy, too.

Jerry Walker : What if Morrissey and Johnny Marr had been born and raised in Georgia instead of Manchester? Well, the Smiths would have sounded like this guy. So much variety of styles and subject matter within his songs. Very personal writing and gut-wrenching vocals. He's a man of passion and talent.

I also heard at least three songs that should reach number one on the country charts because they captured the essence of what true, quality country music should be. Robert Reynolds has written a new song about George Jones that's quintessential boot-scooting fun. (And for Swag fans--keep your fingers crossed for a new album in the future...I can say no more.)

I admire these hard-working musicians and songwriters who believe in what they're doing and retain authenticity and integrity through it all. Driving past Chet Atkins Drive and the massive guitar sculpture on display, I smiled as I thought of George Harrison and his love of our hillbilly music.
Posted by child of nature at 8:48 PM

Hope you will be more popular and everything goes well!
jr bridesmaid dresses