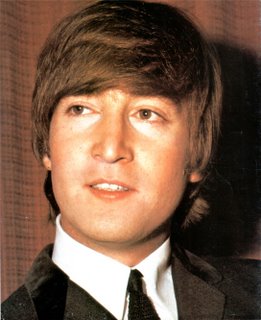 After 6 years of reprints of the original '60s issues, the first new issue of the Beatles Book Monthly was released in October of 1982. Editor Johnny Dean promised many unseen pictures from their archives in future issues. (The promise proved true.) This beautiful photo of John, taken by Leslie Bryce, was on the back cover of the issue and also offered in poster form.

(Come back later for a post about my seething anger at UNCUT magazine, and a review of a new Beatles cover band in Knoxville, TN.)
Posted by child of nature at 11:30 AM