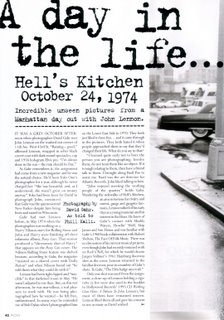 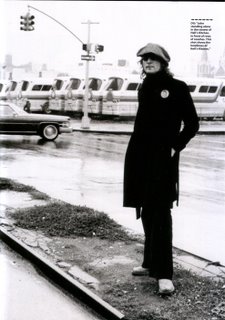 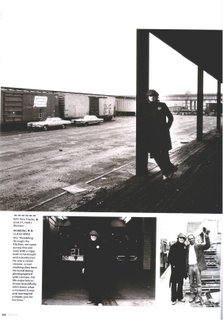 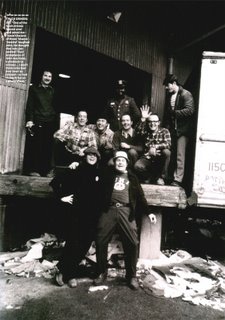 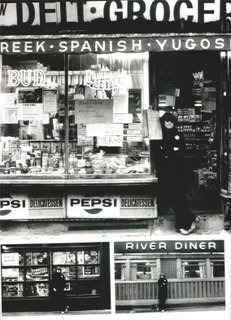 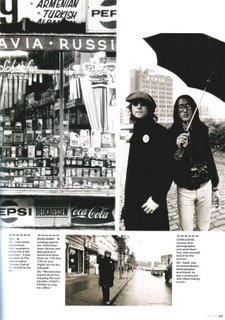 The June 2004 issue of MOJO included these rare and unseen photographs of John Lennon taken by David Gahr on October 24, 1974, in Hell's Kitchen, NYC. I also scanned Gahr's comments and the brief article by Phill Kalli that introduced the piece. (Click pictures to enlarge.) I have a massive subway-style poster of a common photo of John from these sessions entitled "Working Class Hero" hanging above my bed. It's interesting that the Elvis flasher button he wore that day was altered to a Walls and Bridges promotional "Listen To This Button" for the poster.

Which leads me to one of my favorite Lennon bootleg sets--Listen To This... on the infamous VigOtone label (RIP). This three disc set chronicles the Record Plant rehearsals, alternate takes, rough mixes, and control-room monitor mixes from John's "lost weekend" masterpiece, Walls and Bridges. My favorite disc from this set is disc three, which showcases John's home demos for the album. The songs are often better with just John and his guitar--they are more intimate and personal. (Same thing for the amazing Mind Games home demos!) Perhaps some were a bit over-produced in the studio, but it's still a phenomenal album all in all. It amazes me that John did not have confidence in his voice, a voice I think was the greatest of the rock and roll era. He could belt out those pot-boiler rockers one minute, and then soften his voice for a touching ballad the next.

(Ringo is on the Tonight Show as I type, singing "What Goes On" with the All-Starr Band, and it sounds great!)
Posted by child of nature at 11:02 PM

Thanks for your comment! I'm glad you enjoyed the scans. Hope you'll continue to visit!

i love every word of your blog space

Thank you for your continued kindness. Knowing that you respect and appreciate what I write means more to me that you could ever know. For the past three years, I have admired your vision and how beautifully you articulate it.

In the market doorway shot, note the boxes of "Fab" detergent to Lennon's left.