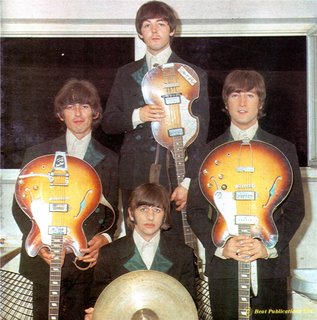 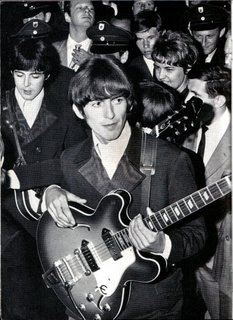 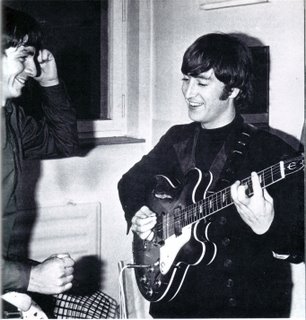 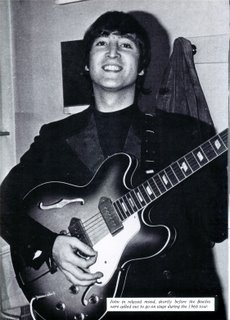 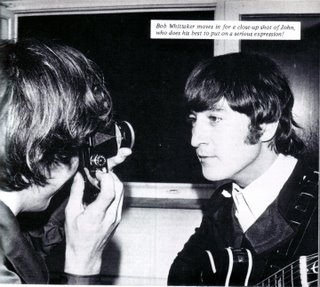 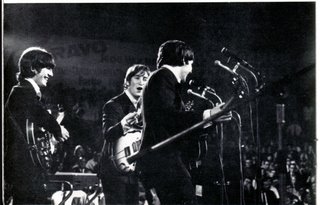 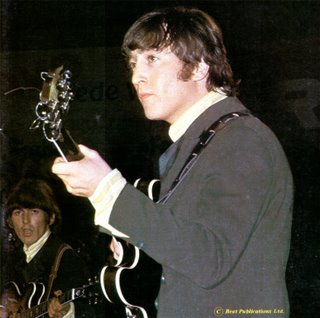 Forty years ago yesterday, The Beatles kicked off their 1966 tour at the Circus-Krone-Bau in Munich, West Germany. After a lengthy absence from playing live while recording their groundbreaking masterpiece Revolver, The Beatles were relatively out of practice. Their second show in Munich was videotaped for a later television broadcast, and fortunately it survives and is in circulation today. Personally, I don't think their performance is a horrible as critics maintain--it isn't perfect by any means, but "Nowhere Man" (shown in the Anthology) is the definite highlight.

The opening acts' performances were also presevered on video tape. Cliff Bennett and The Rebel Rousers (overwrought, think "Sounds Incorporated"), German band The Rattles, and Peter and Gordon warm up the crowd for the main attraction. The Rattles really stand out from the pack, even upstaging Peter and Gordon to me. They're a German garage band with an "Animals meet the Small Faces" sound. They're quite energetic and engaging, whereas Cliff Bennett is a bore. Peter and Gordon showcase their harmonies on their famous McCartney-penned ballads; at this point in 1966, Gordon appears to be fashioning his look after that of John Lennon.

When The Beatles take the stage to open with "Rock and Roll Music" John doesn't appear to be singing at full volume, perhaps out of nerves. Despite the low vocals, the song is solid. There is an awkward segue when they begin the intro to "She's A Woman"--the song is completely edited out, and goes right into "Baby's In Black" (which is very good, by the way). Paul and John waltz back from their shared microphone during the solo. Paul takes the spotlight for a rushed "Yesterday" (sounds fine), followed by the highlight of "Nowhere Man". Before Paul begins "I'm Down" for the finale, John mocks him about messing up the lyrics. The picture above where John is pointing and talking to Paul as George laughs was taken at that moment. John's comments obviously distract Paul, and he completely wrecks the entire song! He mangles all the lyrics to the point where the broadcasters edited out the last bit of the song.

After the concert, the Beatles boarded a train to Essen for their next German appearance. After Essen, they returned to Hamburg for the first time since 1962, and were met by a barage of interviewers asking ridiculous questions, marring a reunion with old friends Astrid Kirchherr and Bettina Derlien (Star-Club bar maid). It's easy to see why touring became such a burden to the Beatles--I can't believe they had to be subjected to such stupidity and humiliation as they were during all the press conferences over the years.

The pictures above were taken backstage and on stage at the Circus-Krone-Bau. The person sharing a laugh and taking a close up photo of John is none other than famed Butcher cover photog and Lennon friend Bob Whitaker.

I particularly like the picture of George as they're about to take the stage, where one can see Brian Epstein top left, standing on tiptoe to look over the crowd.
Posted by child of nature at 12:08 AM

I just recently got a DVD of the Germay tour... I was like, oh my goodness, this isn't good at all lol I love it, though, when John starts to distract Paul. :) I haven't watched the Hamburg one yet. Wonderful photos as always! The John ones are dreamy ^_^

The 1966 Germany tour has always been one of my personal favorites. I am glad that you remembered it to post about it on your blog. Since I no longer have the video, it was a nice rememberance of the concert.

please put it here more ,they are awsome photos ,i think are more in color no?