Backstage at the Budokan Hall 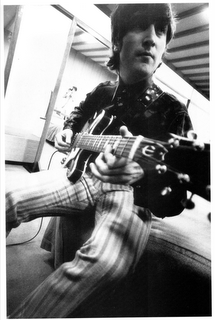 This rather unusual photograph of John was taken by Robert Whitaker backstage at the Budokan Hall in Tokyo, Japan, probably July 1,1966 (the so-called "white suits" performance; the previous evening's attire consisted of "dark suits"). Whitaker had been presented a Nikon camera with a wide-angle lens, a new invention at that time; hence the unual nature of the shots he captured of The Beatles during the Tokyo visit.
Posted by child of nature at 3:18 PM