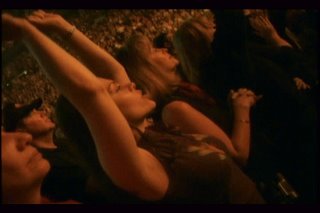 One of the greatest thrills of my life was seeing Paul McCartney in concert for the first time in Atlanta, GA. on Mother's Day, May 12, 2002. As a Mother's Day gift, I purchased a deluxe ticket package for my mother and myself. What made this night even more special occurred a few months later. On the Wed. before the Thanksgiving holiday, the Back In The U.S. concert special aired on ABC television. I knew that one of the camera men had kept his camera on me during the concert, especially throughout "Vanilla Sky" (I was the only one around standing and singing all the words!). As I watched the concert, I was disappointed to see that "Vanilla Sky" had been edited out of the program. Much to my surprise, as the concert was drawing to a close, I spotted my mom and me on the screen! I was singing along with "...equal to the love" from "The End" with my arms raised above me; my mom seemed to be looking at Paul adoringly, as if it was Ed Sullivan all over again!

Even more special than this experience was when I got to see Paul on the front row in Raleigh, NC on October 7, 2002. I'll never forget that "meaningful eye contact" we had--he acknowledged me with his thumbs-up gesture as he sang to me. When he turned away, I had to turn around and scream at my friend standing to my right. Just knowing that Paul actually saw me, knew I was there and sang to me...

He looked amazingly as fit and as handsome as ever. His hair was a bit longer than the first time I'd seen him in concert. I studied every hair on his head and arms, his hazel eyes, his eyebrows, the sweat on his brow. Of course, I cried. I had brought him a stuffed koala bear (his favorite animal) with a left-handed guitar. Paul's personal security guard took the bear from me, ripped its insides out, sort-of put it back together, and placed it on the stage next to Paul! (Unfortunately, I don't think he ever got it.)
Posted by child of nature at 8:43 PM