The Act You've Known For All These Years 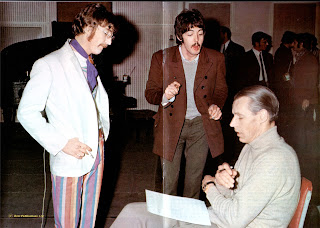 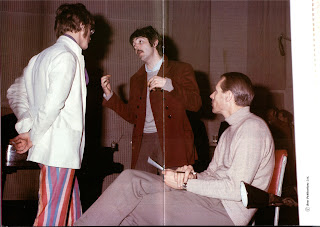 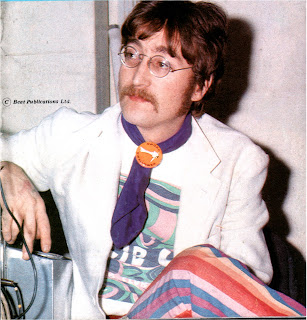 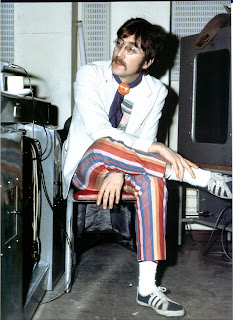 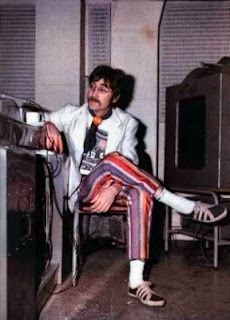 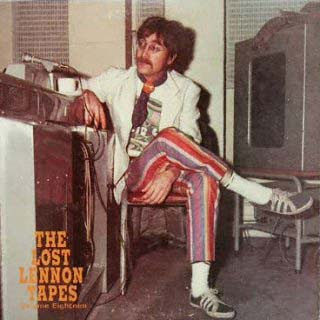 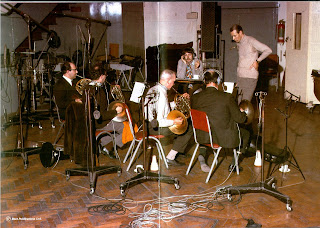 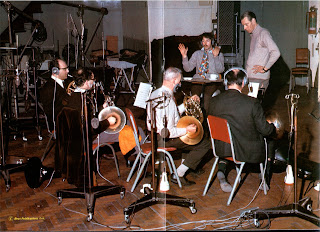 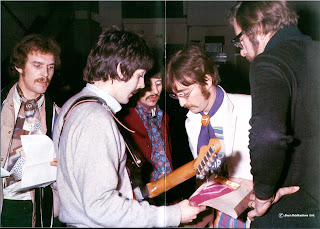 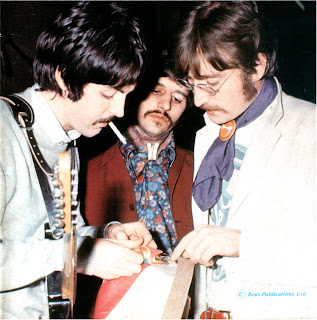 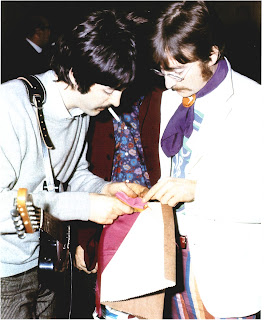 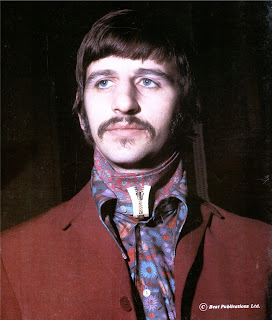 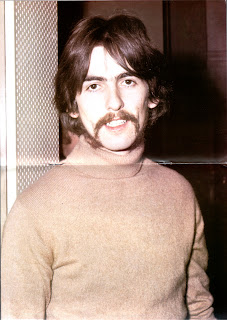 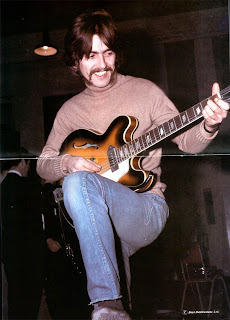 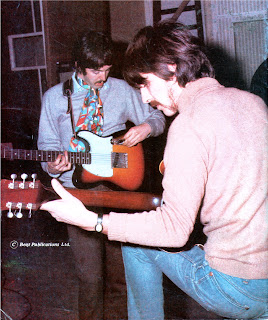 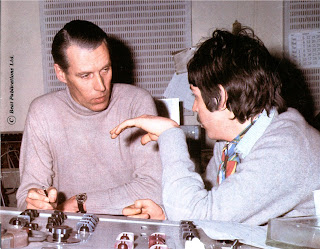 It's a color extravaganza this week--all color photos from a Sgt. Pepper session! In the coming weeks, I'll be posting many, many more b&w photos from this particular session.

All of the above photos were taken on Friday, March 3, 1967. This was the evening that four French horn players recorded their parts that were in turn overdubbed on to take 10 of the title track, "Sgt. Pepper's Lonely Hearts Club Band". The four musicians were James Buck, Neil Sanders, Tony Randall and John Burden. Unbeknownst to them, John Lennon was secretly taping their conversations for his own personal use (just as he had done on the Jan. 9th "Penny Lane" session)! Paul hummed the melody to the musicians, and they transcribed it on to paper. I love the photos of Paul directing them.

The photos also indicate that the Beatles (with a little help from Neil and Mal) looked through fabric swatches as they picked out what they wanted for those now-famous Sgt. Pepper uniforms. Isn't it amazing that we have photo evidence of these processes?

Once the musicians had finished their overdub work and procured Beatles autographs, George Harrison worked out the awesome guitar solo for the title track. These pictures show both Paul and George with guitars--Paul with that great Telecaster and George with the faithful Casino. Once this solo was perfected, The Beatles retreated to the control room, and four additional mono mixes of "Lucy in the Sky with Diamonds" were completed.

If you haven't heard the mono Sgt. Pepper album, you must find a way to immediately. Weeks were spent on the mono mix, and it's a whole different experience compared with the stereo. John's vocal on "Lucy" is double-flanged like you wouldn't believe, giving it such a trippy psychedelic effect.

Don't you absolutely love John's attire? I love those pants and the "Sword Swallower" button.

I scanned all the above photos, save for two--the one from the famous Fiz collection, (which is now off-line, I'm sorry to say) and the Lost Lennon Tapes cover. Click to enlarge! These photos are centerfolds and covers from Beatles Monthly Books.

(Reference: The Complete Beatles Chronicle by Mark Lewisohn)
Posted by child of nature at 2:34 PM

Another great group of photos!

When I see these studio shots, I'm always amazed at how such expansive work was accomplished in so small a space. The image of Paul in front of the brass quartet listening in the phones is priceless! It provides a glimpse into how the magical perceptions of The Beatles music that we all share actually took shape. How sad that they themselves are the only ones who couldn't really take that ride.

Thanks again - keep them coming!
Ed

Would you be so kind as to post the URL of Ken Wood's Sgt. Pepper Sessions Photo Page? You've mentioned it several times and I can't seem to find it.

Here is the link to Ken Wood's page:
http://www.weybridge.de/pepper/index_ken.htm

The Epiphone Casino Harrison is toying with in one of the photos is not his, it's McCartney's. It is strung lefty, the headstock is from a 1962 and there is a strap peg on the lower horn. Also the sunburst does not match Harrison's Casino seen in "Hello Goodbye" promo film and 1966 German tour photographs. Thanks for the session photos anyway. Wonderful!