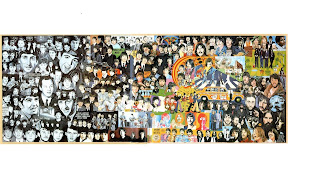 Over the past few months, I have been swept up in the Winter and Spring of Love, focusing mainly on the landmark Sgt. Pepper sessions and the events that transpired within that time frame. It's quite enjoyable to immerse oneself in a particular point in time, trying to recapture some of what made it so revolutionary and memorable, trying to imagine what it would have been like to witness these events first hand. I am envious of those fans who were able to experience each new Beatles release as it happened, those who were there to witness their progression and be astounded by their artistry. I must say we fans of today are very lucky as well--all the legitimate and conversely illegitimate DVDs and CDs, the countless books, Internet connections, etc. that we have now allow our Beatles obsessions to be continuously fed.

Last night I attended a Knoxville Symphony Orchestra Pops concert with the Beatles tribute act "Classical Mystery Tour" performing. I had never experienced the Beatles music with a full orchestra before, and I must say that this performance was astounding. Hearing "I Am The Walrus", "Penny Lane", and "All You Need Is Love" with all those orchestral parts being played live--joy just swirls inside. Though the crowd seemed to be made up of people who were there because it was a KSO event rather than a Beatles-related event, everyone got into the act and seemed to respond very positively. The band didn't seem to focus too much on being an exact representation visually, though they did don costumes and such--the focus seemed to be more on the music. Only a few flubs with the lyrics here and there, and even John himself had that problem from time to time! Their "Paul" is the best one I've seen live--he has the vocals and mannerisms down pat, you just have to forgive him for not being left-handed. If they come to your city, don't hesitate to attend.

In commemoration of John C. Winn's 100th Beatlegs Podcast, I assembled a two-piece scan of The Trojan Horse, a painting by Barry Agar, to accompany that entry. This painting covers The Beatles' entire story from childhood to break-up. Some of his listeners have requested a larger scan of the painting, so here it is--click on it to enlarge. If you have not heard this amazing 100th podcast yet, what are you waiting for? Click the link on this page and download it. This is Mr. Winn's best work yet. You just have to hear it for yourself! I'll be back shortly with some random pictures, more Sgt. Pepper pix, and a little special project I've got in mind...
Posted by child of nature at 6:32 PM