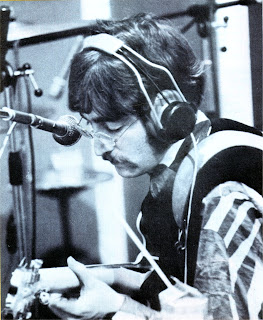 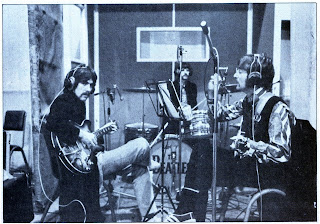 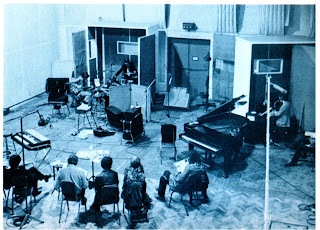 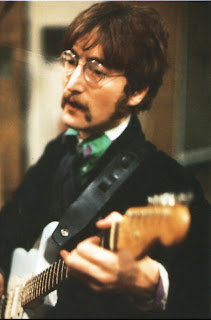 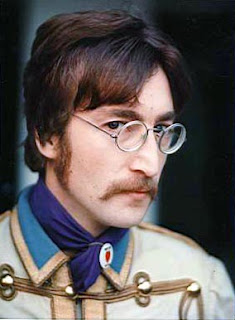 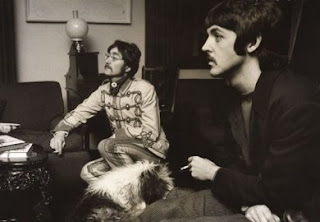 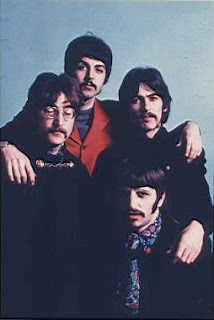 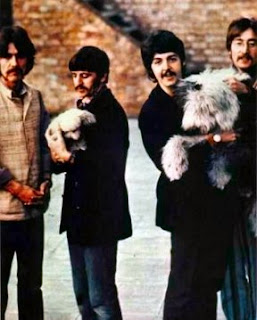 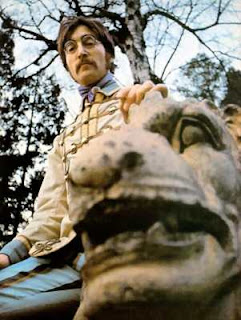 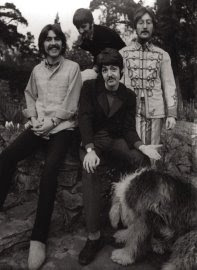 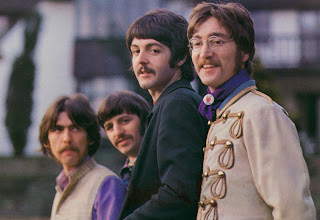 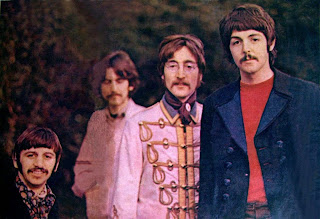 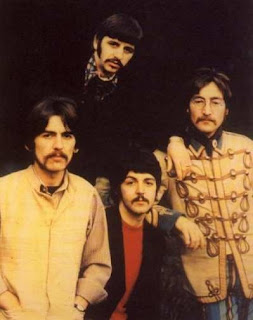 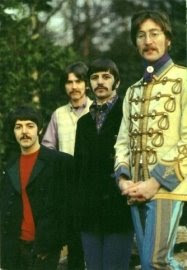 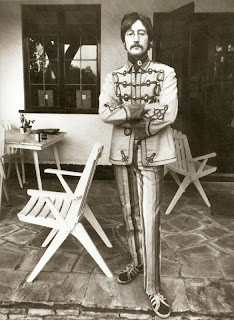 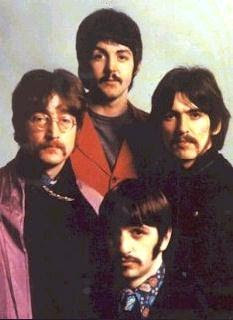 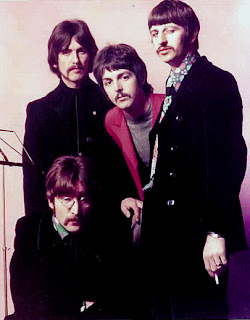 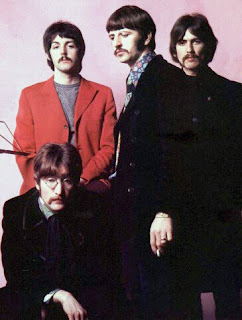 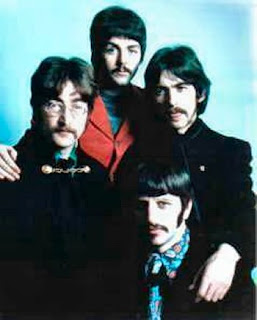 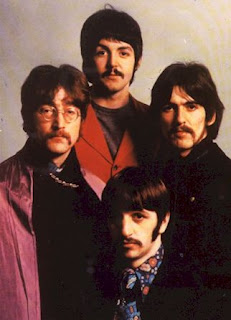 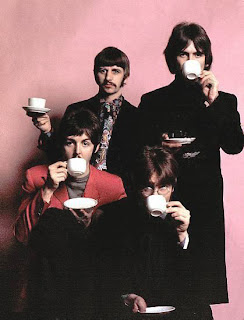 While looking through some Beatles Forever magazines from 1976, I came across the top 3 photos taken at Abbey Road's Studio 2. At first, I was not able to determine the session at which they were taken, so I immediately got online and opened Ken Wood's Sgt. Pepper Sessions Photo Page. He has two of the photos in the "unknown" section, but he did not have a scan of the picture of John that's at the top. After looking through photographs and doing a little research, I have come to the conclusion that those 3 photos were taken during the rehearsal sessions for "Lucy In The Sky With Diamonds" on February 28, 1967. John appears to have removed his jacket and cape, revealing more of the green and purple striped shirt whose collar could only be glimpsed in previous photos. He's also wearing the same shoes. Though he is playing his blue Strat in the color photo, he's moved on to his Epiphone Casino (with it's Japanese charm around the neck) for these pictures. Ringo seems to have on the psychedelic tie he was wearing in the "pink" background photos (that appear to have been taken at the studio, too). George has on that long black coat as well. In the third picture, it seems to me that Paul is playing the Lowery organ off to the right, and George has removed the long black coat, but otherwise everything is the same.

Earlier in the day, LIFE magazine had arrived at Kenwood (edit: It has been determined that the photos were taken at Ringo's home Sunny Heights) to photograph the Beatles in their new Sgt. Pepper look. The photos of John wearing that beautiful Victorian military tunic are from that session. Later they accompanied the Beatles to Abbey Road, and that is perhaps where the photos where John is wearing a cape (or two) and the lads having a cuppa were taken. The photographers also stayed to watch the rehearsal, during which George Martin commented that nothing was going to be finished that night. Eight hours later, the rehearsal was over.

So, what do you think? I've included many pictures from that day, though this post is not meant to be comprehensive. I only scanned the top 3; the others have come from various places over the years that I managed to save on my hard drive--thanks to all those who share their Beatles' photos! If you click on some of the photos, their actual size may be larger.
Posted by child of nature at 9:28 PM

Well done! It does indeed looks like John is wearing the same clothes. Have you told Ken about this?

Hi! Thanks for the comment. I sent Ken a PM at BZ to let him know. I tried emailing him, but the email was returned to me undelivered.

Yes, I agree! Very nice research -
and I might add that this theory
has been around before but now I
consider it verified and will change
that on my website. Thank You!
Ken Wood

Hmmm...Paul seems to like the color red. Interesting that he would wear a red coat while the others are in black...

Hi, it's Greg from the Beatle photo blog, good work with finding this top photo, i think you're right about the rehearsal session. The old fanzines are goldmine for cool photo's that havent been seen since, #1 on my wants list is the first eleven issues of'The write thing' for it's day it had excellent printing, even better than some fanzines today.

Greg--thank you so much for your comment. I thought that top photo of John must be kind of rare because I had not seen it anywhere before. Thanks so much for sharing your photos on your blog!