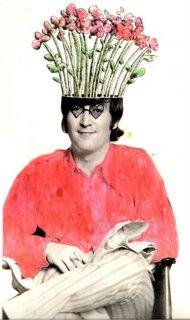 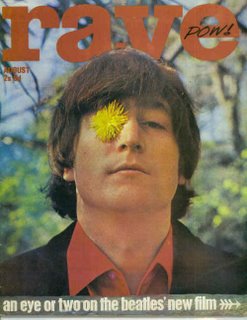 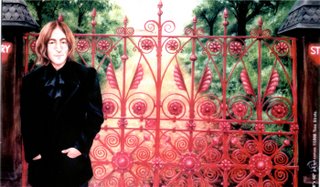 "Nothing is solid. Everything is an illusion.”—John Lennon

Mystics believe that there is more to life than the day to day drudgery—there is a deeper element to our existence beyond what we experience in the physical world. Defining mysticism, however, is extremely difficult—how can one describe the indescribable--an intensely private, powerful, and subjective experience? Mystics within every major religion, and mystics without a set of doctrines or dogma, all experience a Oneness or Union with the Divine, or Transcendent. There is a loss of Self—the Self becomes united with something greater. Many have achieved this experience through meditation, fasting, an ascetic lifestyle, yoga, or the ingestion of hallucinogenic substances.

A recurring theme in Lennon’s work is that of liberation through self-knowledge. As early as The Beatles’ 1963 debut album, Please Please Me, Lennon reveals that his mind is a refuge from problems surrounding him (e.g., “There’s A Place”): “There is a place/ where I can go/ when I feel low/when I feel blue/ and it’s my mind/ and there’s no time/ when I’m alone.” Certainly the song can be construed as a mere pop song about young love; however, the freedom to be found in introspection and solitude expressed in the lyrics was only equaled by Brian Wilson’s supurb “In My Room” at that point in pop music history.

By 1965’s Rubber Soul, it was already apparent that The Beatles were more than a passing fad or run-of-the-mill pop group. This particular album, with its maturity and depth, contained Lennon-McCartney’s first revelation of a belief in the power of universal love. In “The Word”, Lennon reveals the own doubts he experienced before embracing this philosophy. Once he experienced this revelation and discovered the truth, he is almost evangelical in his approach, “Now that I know what I feel must be right/I’m here to show everybody the light…Say the word and you’ll be free/Say the word and be like me/It’s the word I’m thinking of/Have you heard the world is love”. Lennon implores the listener to cast aside his or her own reservations and fully embrace the new way of thinking that can bring freedom and peace.

Released as a B-Side to “Paperback Writer”, the rapturous “Rain” relates a state of higher consciousness as being in tune with varying physical phenomena. Lennon illustrates an “us and them” quality—those in the know are content no matter what befalls them, because life is more than what one can observe. Those who are shaken like reeds in the wind have yet to understand the path to self-realization—they might as well be dead because they are not truly “living”. This line of thinking directly leads into another Lennon masterpiece, “Strawberry Fields Forever” and its declaration that “nothing is real, and nothing to get hung about.” If we become as children, discover that innocence yet again, the mundane aspects of the adult life are cast off and a deeper connection with the transcendent can be made. In the song “A Day In The Life”, Lennon and McCartney recount the events of a day through newspaper articles and the protagonist’s rush to his unfulfilling job. Lennon pleads with the listener, “I’d love to turn you on.” –I want to show you there is another way to live, there is so much more than this. As humans we are meant for so much more than walking through life as zombies, unaware of our spiritual side and our connection to all living beings.

Probably Lennon’s most overtly psychedelic song, however, is “Tomorrow Never Knows”, a paean to the mystical experience of an acid trip. LSD proponents Drs. Timothy Leary and Richard Alpert sought to give LSD a workable religious framework because they believed in the drug’s ability to induce an experience within the taker comparable with that of religious mysticism. Their manual for mind expansion entitled The Psychedelic Experience was then taken from The Tibetan Book of The Dead and Jungian psychology. Lennon read the book and was inspired to set the message of the book to music. What The Beatles achieved was monumental—a song unlike any pop song heard before. Experimental in both music and lyrics, "Tomorrow Never Knows" continues to uplift and inspire--and drugs are certainly not needed to believe in the message of "love is all and love is everyone."

Lennon carried the message of peace, love, and self-realization into his post-psychedelic work as well, continuing throughout his solo career; therefore, his view of mysticism was more than just an aspect of hallucinogens—these ideas were a part of who he was as an artist and human being. Certainly much is said and written about his inherent dichotomy, as he termed himself “a violent man who learned to regret his violence” and espouse a philosophy of universal love.

The posthumous published book Skywriting by Word of Mouth contained Lennon’s personal views of mysticism. Unfortunately, it is his last words on the subject.

"...Many, if not all, great men and women were 'mystics' in a sense: Einstein, who at the end of his life remarked that if he had to do it over, he would have spent more time on the spiritual; Pythagoras and Newton were mystics. But the main point I was getting at was the fact that in order to receive the 'wholly spirit,' i.e., creative inspiration (whether you are labelled an artist, scientist, mystic, psychic, etc.), the main 'problem' was emptying the mind.

You can't paint a picture on dirty paper; you need a clean sheet.

Van Gogh's 'going crazy,' Dylan Thomas's 'drinking himself to death,' etc. were just efforts on their behalf to break out of the straightjacket of their own minds. I include myself and my generation's so called 'drug abuse.' Self-abuse would be a more apt expression.

(John discusses the artist Gauguin and his life, death)

...he had access to so-called mysticism...fasting...mediation...and other disciplines (as in disciple) he could have reached the 'same space.' Hard work, I grant you, but easier than killing yourself and those around you.

It's the same with the Christians (so called). They're so busy condemning themselves and others, or preaching at people, or worse, still killing for Christ. None of them understanding, or trying in the least, to behave like a Christ. It seems to me that the only true Christians were (are?) the Gnostics, who believe in self-knowledge, i.e., becoming Christ themselves, reaching the Christ within. Christ, after all, is Greek for light. The Light is the Truth. All any of us are trying to do is precisely that: Turn on the light. All the better to see you with, my dear. Christ, Buddha, Mohammed, Moses, Milarepa, and other great ones spent their time in fasting, praying, and mediation, and left 'maps' of the territory of 'God' for all to see and follow in our own way...." John Lennon, 1978, pp. 33-36

MacDonald, Ian. Revolution In The Head: The Beatles' Records and the Sixties. Pimlico, 1994.

today as i was driving in ann arbor , i was aware that there were 2 astronauts performing space walk maneuvers from the shuttle to the station. i felt a great desire to be with them , to look in their eyes through the space helmet , to hear their voice in the headset , to reach out and hold the universe in my hand.

i felt something very similar while reading your thoughts in this letter.

you have expressed very clearly , simply & correctly , the essence of lennons purpose for creating.
one aspect being that , it wasnt necessarily an activity which brought instant joy , but often a necessity which could not be denied.

your understanding & ability to translate these numerous truths to others has confirmed in me something that i have found in your offerings from the beginning. that is , your love of mankind has enabled you to see what is not seen & hear what is not heard. this is the inspiration for great works of art.
it is the cornerstone to the worlds great religions & philosophies. it is the foundation for scientific experimentation.

here is one more bit of truth to contemplate......

it is often believed that in order to find & translate mysticism , one must be a mystic in his/her own right.

it is clear , that you are more than worthy of this honor , along with many other titles to come as your life continues to expand.

- peace be upon you always -

Dear joe:
I hope to one day truly deserve the confidence you have me. I shall be in constant pursuit. It is inspiring to know that someone out there can see my love and concern for my fellow brothers and sisters. Knowing these words come from you, a soul I feel is the wisest I've ever encountered--it's humbling. You know me and understand me better than anyone, and we've never met. I am not worthy of such an honor, but I will try to be.

Thank you for believing in me. I thank God for you.