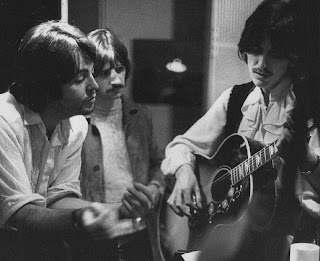 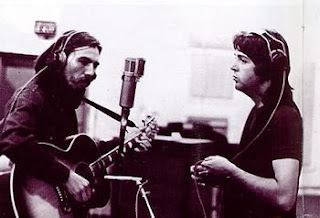 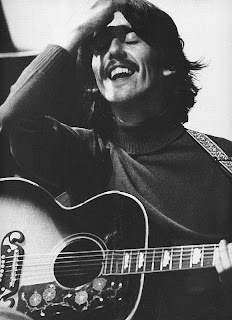 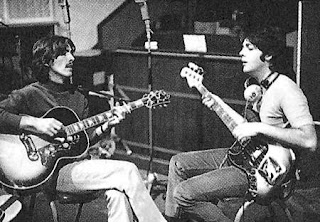 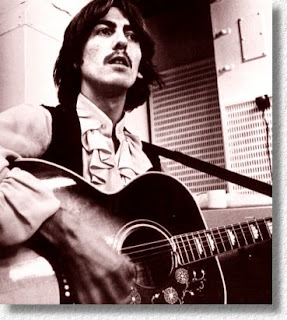 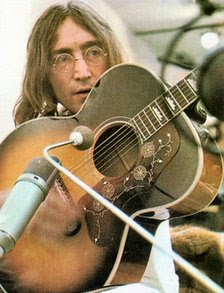 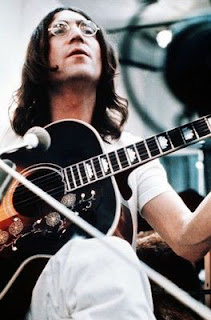 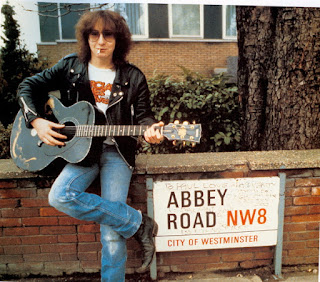 When expressing his ardent love to Cynthia, John Lennon once wrote passionately, "I love you like guitars." George Harrison spent his school days sketching various guitars in his notebooks. There's just something about a guitar that can evoke such strong emotions in musicians. I know I feel a particular attachment to my 3 guitars as well. Trini, the excellent blogger for "Breakfast With The Beatles," kindly sent me 3 of the above pictures, including the adorable one of George laughing with eyes closed (thanks, Trini). These photos are from the sessions for The Beatles, Let it Be, and Abbey Road. (Click to enlarge--some are large hq scans.) There are two pages including several pictures of John playing the J200 in the original Let it Be book (but those are for another time).

"I believe that IS George's J200 that John is playing in the
photograph. Both John and George were recording their respective
albums at the same time at EMI. (Also the last time either recorded
at EMI, I believe.) I suspect that John used George's J200 for his
POB album.

Another thing that I heard was that John played acoustic guitar on
George's My Sweet Lord. Uncredited! (Which is so unlike John!) John
never ever mentioned participating on that recording.

Thank you for the email, Ken!

A long time ago, I also received an email from Kevin, seeking additional pictures of John's black Yamaha jumbo acoustic guitar, emblazoned with a dragon. I finally found a picture of Julian with the guitar in front of Abbey Road. Perhaps Julian still has this guitar. If any reader has a picture of John playing it, please send it my way, and I'll make sure Kevin gets it!

Thanks to everyone who leaves comments, sends emails, or just drops by.
Posted by child of nature at 6:39 PM

Thought you'd also be interested to know that the J200 seen in these pics was given to George by Bob Dylan. It is the same one seen on the cover of 'Nashville Skyline'.

Not sure about the 'My Sweet Lord' bit with John on guitar. There is a story told by Alan White that John played guitar on 'If Not for You', but even that lacks credibility as John and Yoko were in California doing their Primal Scream Therapy for almost all of the time the recording of ATMP was taking place. Still, could be.

Oh - and yes, that is George's J200 that John is playing, but those photos are from 'Let it Be', not POB (I know you say that in the blog, but the email seems to indicate otherwise). John had shaved his head by then and was pretty much short-haired through 'Imagine'.

child of nature said...
This comment has been removed by the author.
7:35 PM

Kenneth's email was about my earlier post concerning George's J200 and the picture of John with his newly-shorn hair circa "Instant Karma!"--it was not about my most recent post. Neither Kenneth nor I thought that picture was from Let It Be; I know that the ones of John in white at Apple are from LIB (have the film, the book, etc.)

I actually relayed the story that Dylan is holding that guitar on the cover of Nashville Skyline in that earlier July post.

From Madinger and Easter's essential tome, Eight Arms To Hold You, pg. 428: "Drummer Alan White recalls an uncredited rhythm guitarist playing on this track, namely John Lennon. George recalls that the lineup consisted of 'Ringo and Jim Gordon on drums, five acoustic guitars, two pianos and bass'; what, no Alan White? Maybe John played on something else!"

As we well know, George had difficulty recalling who played on what--guess that's part of the Phil Spector "Wall of Sound" way of doing things! (Phil Collins and Peter Frampton were initially uncredited--Frampton still isn't!!)

Thanks, as always, for your continued interest and interesting comments!

Meant to include that Madinger & Easter were referring to "My Sweet Lord"--Alan White's comments were about MSL, not "If Not For You."

Cool. Thanks for the info. Didn't see the earlier post (sorry! sometimes I miss 'em). I've always read the Alan White thing as INFY, but I haven't read the EATHYB - I'll have to check that one out. Either way, it still seems unlikely, just because of the recording dates and J&Y's time in California.

And yes you're right, the Beatles themselves were often the ones with the worst memories of what happened when and who played what, etc. I love those bits in Anthology when Ringo can't remember what was on Rubber Soul and what was on Revolver and George not remembering they played Shea Stadium twice - priceless.

It's always amazed me how much you information can actually assemble in relation to photos like these, simply from the exhaustive amount of coverage they received. It's also fortunate they recorded for the most anal-retentive recording company in the world. Books like Lewisohn's Sessions and the fantastic (relatively) new Recording the Beatles would never have been possible if they had recorded elsewhere. I'm a huge Kinks fan as well, and outtakes of theirs can sometimes be attributed to a one or two month period, whereas with the Fabs you can almost always find an exact date.

Thanks as always for taking the time to post your wonderful photos!

John and Yoko cut their hair on Jan. 20, 1970, so I think the picture from my July post looks like around IK time--John's hair looks as short as it was on TOTPs. By the time he began recording POB, his hair was a little longer (like the picture of him with the dobro).

John was in the studio for POB beginning Sept. 26, 1970; George was still at EMI mixing ATMP until Oct. 1970 (recording from May - Oct.)...somewhere they could have crossed each other's paths ("It's Johnny's Birthday").

I think I'm going to ask Ken Scott what his recollections are--perhaps he can solve the mystery!

However, we do know that George played on "Instant Karma!"

Yeah, knew about the little overlap, but seems like George was wrapping up.

Totally agree that the shorn-hair, George's J200 photo has to be IK time period.

Ken Scott is the best. Trying to find a way to get him to Philly to do his Bowie/Fab presentation.

'It's Johnny's Birthday' is one of my favorite (should I say "favourite"?) recordings ever made. Totally shows why George got on so well with the Pythons.

Yeah, knew about the little overlap, but seems like George was wrapping up.

Totally agree that the shorn-hair, George's J200 photo has to be IK time period.

Ken Scott is the best. Trying to find a way to get him to Philly to do his Bowie/Fab presentation.

'It's Johnny's Birthday' is one of my favorite (should I say "favourite"?) recordings ever made. Totally shows why George got on so well with the Pythons.

Sorry for the double post. The word verification thingy is being a bit persnickity.

Actually,the Black Yamaha jumbo is currently in the hands of the John Lennon museum in Japan. After a dialogue I had with Julian he wasn't even aware of that himself.He told me this was the last guitar of his dad's that he played in 1980/81 after the assasination. He said he recently asked Sean of it's whereabouts and he said he was unsure.This was Julian's favourite guitar of John's.--Kevin