It Happened In Monterey A Long Time Ago 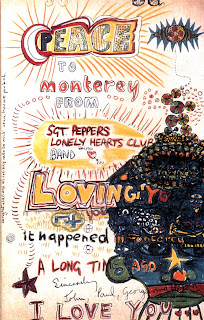 On this day, Paul McCartney's 65th birthday, I've been thinking about Derek Taylor.

The reason this erudite, articulate, and endearing man has been on my mind lately is inevitable--forty years ago, Derek was at work making sure the Monterey Pop Festival remained as intended: a free concert celebrating music, love and flowers. He believed in the lofty ideals that summer held, and was genuinely committed to a revolution of hearts and minds. Derek's account in the Beatles Anthology sums up the nature of the free festival as such: "The police and fire departments, extremely negative at first, found they had nothing at all to trouble them and it soon became so cool and easy and peaceable that they were handing each other flowers. I presented a glass prism necklace to the chief of police at the final press conference. 'This is from us to you and it makes us one,' I said without cracking up, and he took it without embarrassment. Imagine such times...I wonder if you can. It did happen in Monterey, a long time ago. Musically, the festival was stunning beyond description. Almost all the artists were beyond praise, not only for their offer of free services, but for the power of their performance." (p. 254)

I pulled out my copy of It Was Twenty Years Ago Today, Taylor's chronicle of the golden summer of 1967, and smiled as I read his words. Another favorite book of mine is Richard DiLello's The Longest Cocktail Party, Apple's resident house-hippie's account of those crazy days. Derek comes to life in this book as the stabilizing factor amid the chaos. It's hard to believe that he's been gone for 10 years now...

The above scan is of the famous sketch Paul sent to the Monterey Pop Festival organizers. The Beatles had been asked to play the festival--can you imagine if they had? Paul recommended a London-based trio with an amazing guitarist for a leader instead--the Jimi Hendrix Experience. The rest, as they say, is history.
Posted by child of nature at 12:24 PM