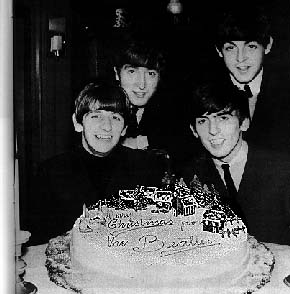 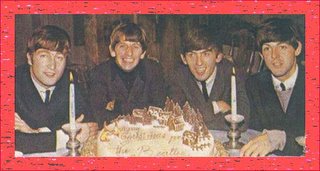 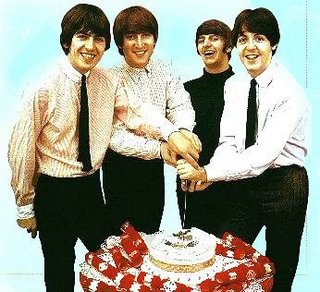 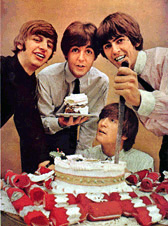 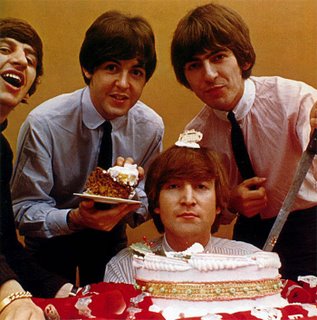 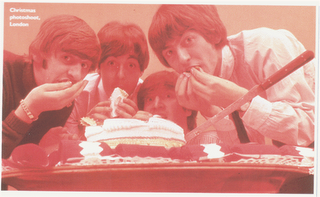 Okay--I have an obsession with traditional British Christmas cakes, such as the one pictured here that our lads are happily slicing and devouring for Robert Whitaker's camera. I also love the cake's appearance in The Who's promo for "Happy Jack"--Roger's on look out as the others attempt to crack a safe; alas, they become sidetracked by this Christmas treat. (Watching Keith Moon slap the merenguie about his face is hilarious.) A friend of mine has attempted to get the perfect cake for me over the past two years, but I've settled on a marzipan covered fruit cake with a holly decoration imported from across the pond. British readers--do you think I'll enjoy what I've got?

It seems as if every British band had their pictures taken around a cake or a pudding for Christmas photo sessions, and they're all delightful. There's something about those traditional decorations that I enjoy, and of course the festive time they commemorate. I guess I'm just a sentimentalist...

Here are some photos of The Beatles with their Christmas Cake, all taken by Robert Whitaker during the same photo shoot that produced pictures for every season of the year (they hold brooms and baskets for Autumn, springs for Spring, etc.) The most famous of these photos ended up cropped and served as the album cover for the Captiol record, Beatles VI. The one shown here is a reverse print, but still pretty good.

I am also including pictures from a restaurant in Sweden where they were presented with a Christmas cake in October! More Beatles Christmas-related photos to follow soon...

(The photo where John has the "Merry Christmas" wreath on his head graced my Christmas cards this year!)
Posted by child of nature at 4:58 PM

You look so happy and I also want eat the birthday cake!!
jr bridesmaid dresses