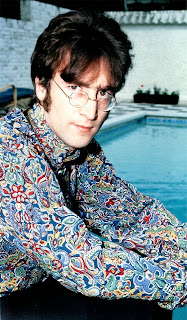 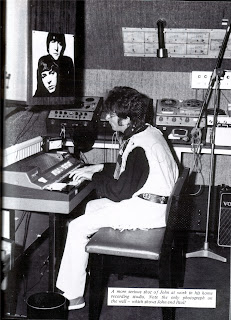 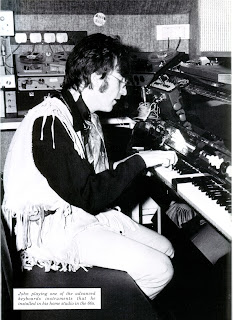 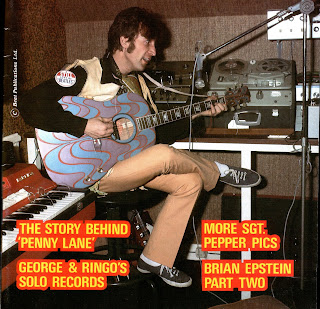 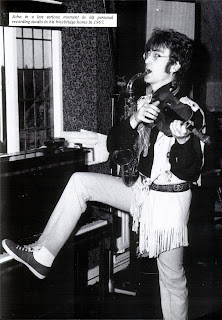 Apparently, there has been a bit of a controversy brewing in certain internet communities concerning the origins of a photograph of John in his music room at Kenwood. In order to dispell this controversy, I decided to scan some photos I have to confirm the photo's authenticity.

On June 29, 1967, Beatles Monthly editor Johnny Dean and photographer Leslie Bryce visited John at his Tudor-styled home "Kenwood" in the stockbroker belt of Weybridge. Bryce photographed John in various interesting places throughout his home, even taking some lovely photos of John and Julian together. Over the years, a myriad of pictures taken that day have appeared in issues of the Beatles Monthly, and the one in question made an appearance in the Sept. 1988 edition. This photo shows John playing one of his keyboards, and above him is a beautiful, touching photo of himself with friend and partner Paul, taken by photographer David Bailey. Looking closely, one can see that the photograph is on a cabinet door, and the door is slightly opened at an angle to reveal the photo to the camera--the shadows also indicate this. When the door is shut, the photo is not visible. Hopefully these scans offer evidence that this photograph has not been photoshoped by sentimental Beatles fans; on the contrary, it shows us all what a "softie" our John was at heart.

I can imagine Paul coming over, guitar in hand, settling in for songwriting sessions with John, while Cyn brings tea and butties up to them from time to time. A joint wouldn't be out of the question either! And there's that photo--the two titans poised as if sides of the same coin, as if they are One great force of art, creation, joy, and love--as inspiration for the evening's work.

I will be posting more information about Dean and Bryce's visit to John's home, and of course, more of those wonderful photographs, at a later date.
Posted by child of nature at 12:12 AM

I have always just loved that photo of John and Paul. It is beautiful in a way and speaks so much about friendship and love. It's touching that it was tacked up there.

Thank you for posting!

Aww. I love that photograph of John in his music room. I never for a moment thought it was photoshopped. Thank you for posting these scans and setting the record straight. :)

These photos are so cool! Like this feeling!
jr bridesmaid dresses

If you want to make a difference in Path of Exile: Expedition, then you'd better prepare enough POE Currency.