"A Reel of Magnetic Tape that Captured a Magic Night"--Lewisohn 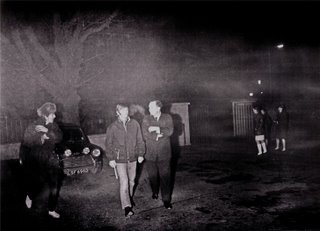 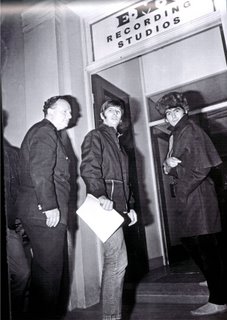 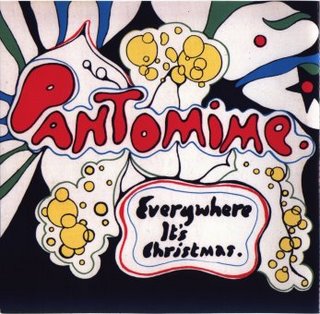 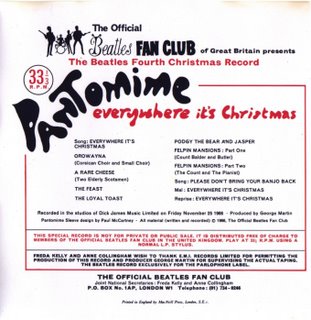 "Cranberry sauce"
I hope everyone had a festive Thanksgiving and ate entirely too much of your favorite foods!

Here are a couple of photos documenting George and Ringo's arrival at EMI Abbey Road Studios the night of Nov. 24th. The Beatles had not been in the studio in five months--not only that, but each had gone his separate way over those months; John filmed How I Won The War, George went to India, and Paul went on safari with Mal Evans. Ringo, left behind those months, felt a bit left out, "I'm sort of out of it there because, with John and Paul, they can still write even though we're sort of not working together. And George can, you know, learn his sitar and do things like that. And I've just been sitting around." Convening at Studio 2, The Beatles began the evening talking, sharing their adventures, and getting reacquainted before work began. George Martin asked what they had for him, and John shouted out, "I've got a good one, for a starter!"

Anticipating this evening, John had perfected his current vision of the song that would introduce The Beatles as truly a studio-only band. EMI engineer Geoff Emerick recounts John's introduction of "Strawberry Fields Forever" to the other Beatles in his book, Here, There and Everywhere: "From the very first note, it was obvious that this new Lennon song was a masterpiece. He had created a gentle, almost mystical tribute to some mysterious place, a place he called 'Strawberry Fields'. I had no idea what the lyric was about, but the words were compelling, like abstract poetry, and there was something magical in the spooky, detatched timbre of John's voice. When he finished, there was a moment of stunned silence, broken by Paul, who in a quiet, respectful tone said simply, 'That is absolutely brilliant'" (p. 135). Inspired and energized, The Beatles immediately began working on the track, figuring out how to embellish and perfect this 'brilliant' song.

Mal and Neil had transported John's own Mellotron from his home in Weybridge to Studio 2, and this evening was the first time it was ever used in a Beatles recording session. For the first take of SFF, Paul set the Mellotron on the brass setting (this was changed to the flute setting for the seventh take). Ringo muffled his snare and tom-toms with tea towels, George added Hawaiian-style slide guitar, and John played rhythm guitar. This simple first take, though beautiful, was only the beginning of a more complex recording that would take shape in the coming days.

November 25, 1966:
The following evening, The Beatles recorded their fourth annual fan club Christmas message, Pantomime: Everywhere It's Christmas, my personal favorite of all the fan club messages. I've included a scan of the psychedelic sleeve painted by Paul. It is a hilarious recording, several "skits" pieced together with Paul's piano playing and all the Beatles' using funny voices and acting out their roles.

(Information gleaned from John Winn's That Magic Feeling; Emerick's Here, There and Everywhere; Andy Babiuk's Beatles Gear; and The Beatles: 365 Days)
Posted by child of nature at 2:16 PM