"The Answer's At The End" 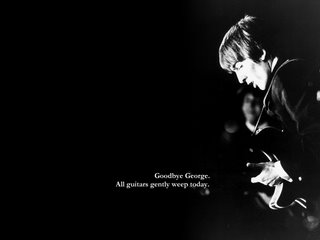 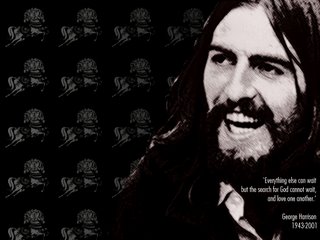 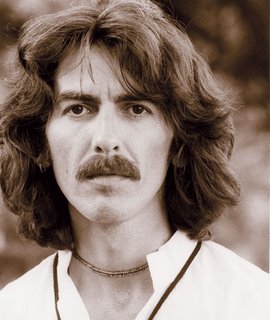 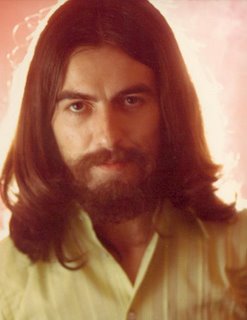 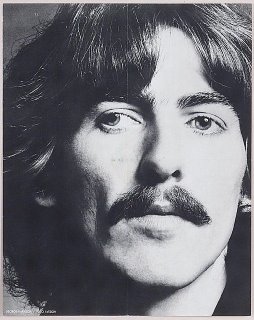 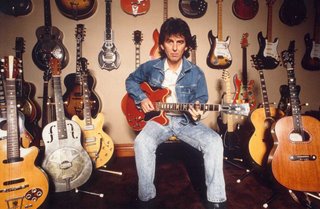 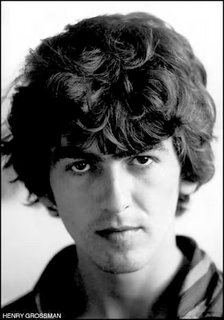 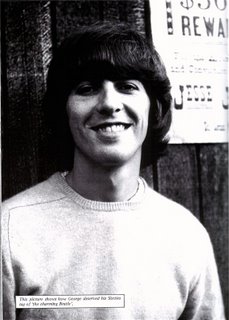 Five years ago today, George Harrison departed this material world. Over the years, we as fans have missed him dearly--his wry comments, his unique smile, that light in his eyes. We have been comforted by his spiritual strength, words of wisdom, and the rich musical legacy he gave to us.

Five years ago at 4:00 AM, a dear friend called me to tell me that George had died. She didn't want me to hear about it on the news--she thought it would be best if she told me herself. I sat up in shock--even though he had been so ill, I still expected him to make a full recovery because I couldn't bring myself to accept the fact that he would not be with us physically anymore. I cried all morning but managed to make it to work where everyone was so sweet to me all day. My 8th grade students presented me with a copy of the People magazine tribute to George at our Christmas talent show--what a touching way to let me know they cared.

When I was going into the hospital for surgery in 2004, I took lots of Beatles things with me to keep in my room. I typed up the lyrics to George's song "If You Believe" to take with me for inspiration. That song means so much to me. George means so much to me.

My mother has remarked before, with tears in her eyes, "George was so wise." I agree. To be that serene, one must be that wise, too...

Not only was George wise, but he was kind as well. Tom Petty wrote in George's Rolling Stone tribute that George was the kind of person who would always hug you before you left, letting you know that he loved you. He also gave gifts to his friends--like ukeleles (Tom said George had given him 4 ukes, because, as George said, "You never know when you're going to need one").

I'm sure many of you know the anecdote Ringo recalled on Conan O'Brien's talk show--Ringo had been to visit George when he was really ill. As Ringo was leaving, he told George that he had to go be with his daughter, Lee, who was having surgery to remove a brain tumor. George replied, "Would you like for me to go with you?" Even when he was ill physically, his spirit was seeking to be with one of his best friends while he was dealing with something difficult.

In Beatlefan issue #147, there's an interview with Sam Brown--Joe Brown's daughter who sang on "My Sweet Lord 2000" and performed "Horse to Water" at the Concert for George (one of the highlights of the show!). She recalls something very sweet George and Olivia did for her mother when she was ill from cancer:

George and Olivia were hosting a Trio Bulgarka concert at Friar Park (Trio Bulgarka is a group of traditional Bulgarian singers who have performed on albums by Kate Bush and Peter Gabriel, to name a couple). Sam's mother (who had been a member of Liverpool group the Vernon Girls) loved Trio Bulgarka, but was very ill at the time. George and Olivia invited Sam and her mother to come early in the afternoon to watch the soundcheck. This meant so much to Sam's mother--it was very emotional for her to hear this beautiful music and share it with George and Olivia. It's these little things that we often don't hear about that illustrates what a thoughtful, caring person George was. Olivia is something special, too.

I have had a vivid dream of George. It was night, and he had made a huge camp fire out on a beach. A large group of people, myself included, were huddled at his feet, listening to stories and laughing with him.

As Joe Brown sang as the Concert For George came to a close,
"I'll see you in my dreams..."

(I am unsure as to who it was who created those two beautiful wallpapers I've included here--but whoever you are, thank you for making them five years ago--they still mean a lot to me today.)
Posted by child of nature at 5:55 PM

Hello. I can see how much George means to you and why. George and all of the Beatles mean such a great deal to me also and I just wanted to thank you for creating such a wonderful blog. It's amazing how much Beatle music and the gentle wisdom of George or the thought inspiring comments of John, can really impact our lives.

Thank you again and please keep posting!
We miss you George....
Sincerely,
Lauren

It's All Too Much
and
It's All In The Mind, You Know,
two of my fave George comments.
Good Advise actually.
-mike

Hello there. I'm from Brazil and I'm very impressed by your work. We miss George too. Recently I've heard different version of "Here comes the sun", with George's make specially to Emerson Fitipaldi.