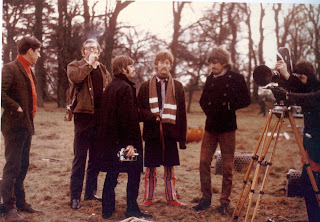 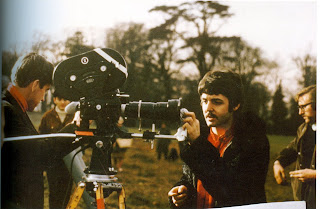 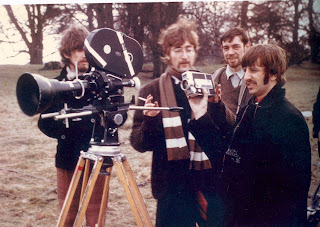 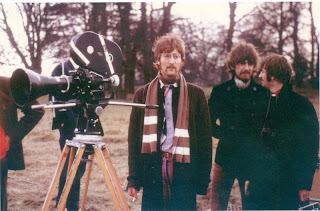 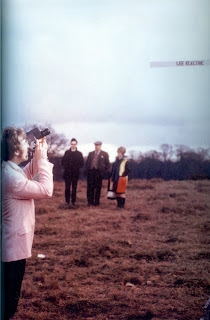 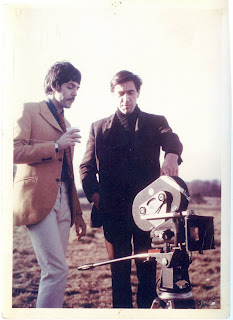 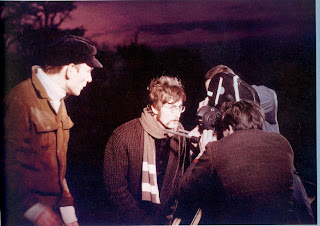 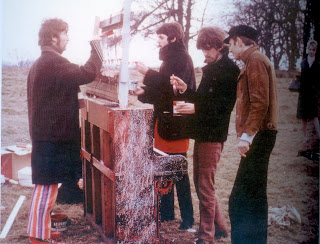 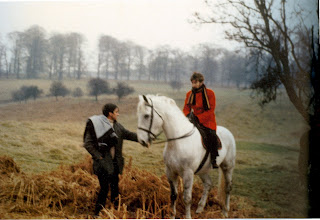 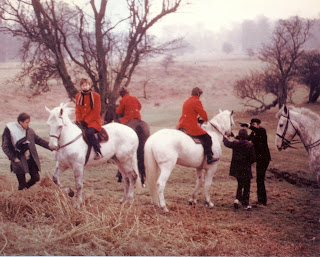 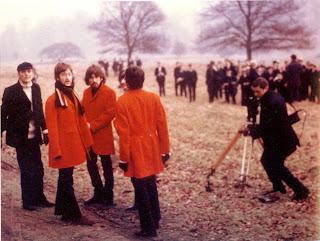 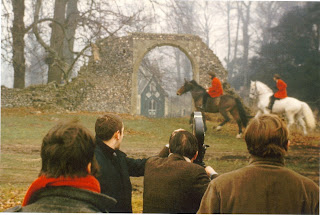 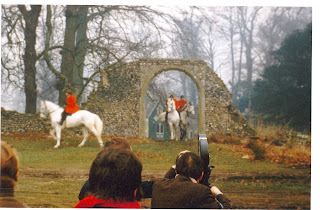 On January 30 and 31, and then again on February 5 and 7, 1967, the Beatles filmed promotional videos for both sides of one of the greatest (if not the greatest, in my opinion) pop singles ever, "Strawberry Fields Forever"/"Penny Lane". As with their previous promos, these were also produced by close friend Tony Bramwell. These photographs were taken by Don Long and later purchased by Mark Hayward, who included them in his book, The Beatles Unseen. These photographs reveal the Beatles as active participants in every aspect of filming, learning about the process from director Peter Goldman. The second picture exposes a technique--Paul rubbing Vaseline on the camera lens! In the third picture, Ringo is passing Mal Evan's video camera to John, a camera which is now in Mark Hayward's collection.

These ground-breaking clips were shot in vivid color, but were only shown in black and white at the time. As evidenced in the Anthology project (which includes incomplete versions), these promos have been brilliantly restored. When I met Tony Bramwell a few years ago, a fellow fan asked him about the promos, and he talked about how they have been restored but are just sitting around in the vault, so to speak. Let's hope we'll see an official, complete Beatles promo collection DVD sometime in the (near) future...

I suppose everyone has heard the news that the long-awaited remasters will be released on 09.09.09 (John would approve of the date). I am very pleased that there will be both stereo and mono collectors boxes, and I will be pre-ordering both; however, I wish that each album would be released in a deluxe format, including both the mono and stereo versions, plus a disc of rarities--singles, odd mixes, outtakes, demos. This would have been the perfect opportunity to include the Kenwood and Kinfauns demos with a deluxe White Album. I am encouraged by the technical details released by the mastering team--perhaps these will not be drenched in NoNoise or mastered too "loud," as many modern releases are. This is quite an exciting event, and I can't wait until we can all enjoy them.
Posted by child of nature at 9:36 AM

wonderful pictures, they're my fave "candid" photos of the Beatles, I hadn't know who the photographer was until now, thanks :)
I agree, the best release would be a deluxe version with mono, stereo, and all the music video promos. What I would shell out for that.

Beatles DVD projects take forever - it's a shame all that remastering work on the footage hasn't been put to full use yet.