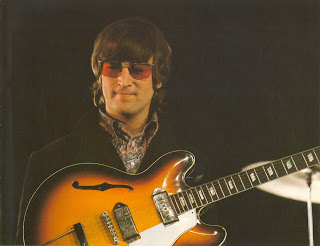 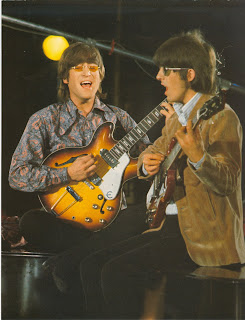 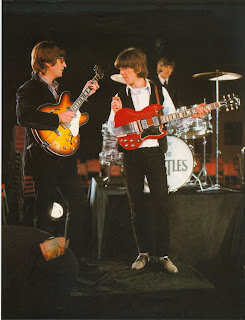 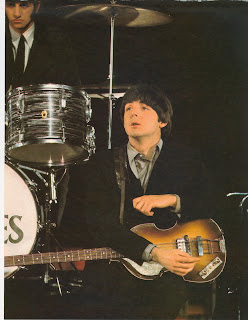 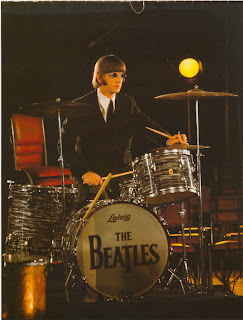 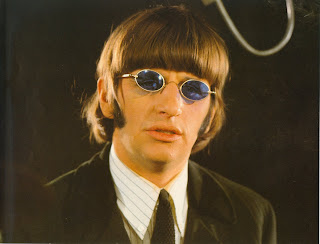 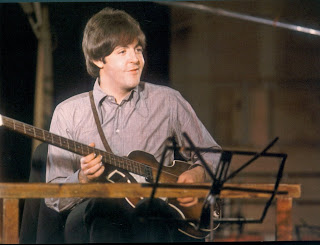 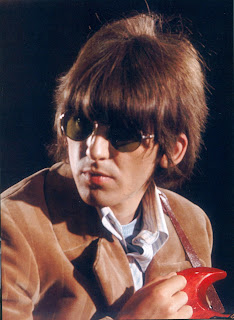 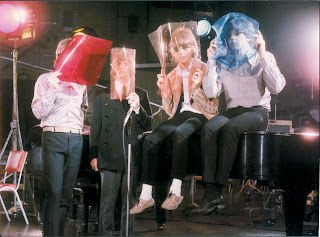 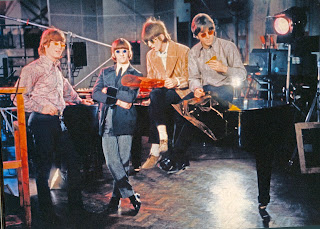 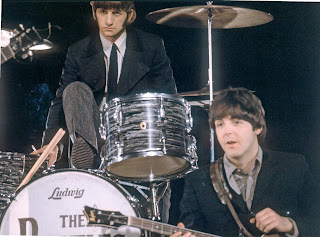 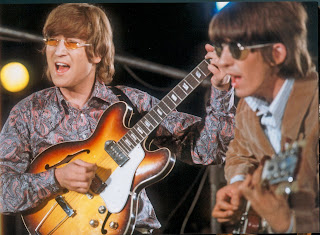 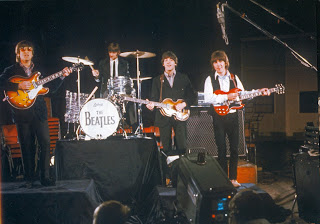 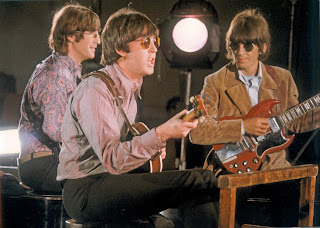 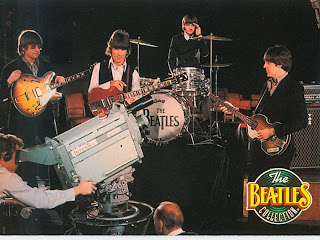 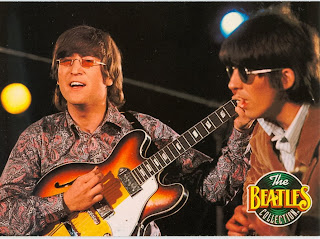 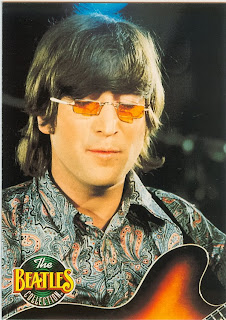 Presented here are some photographs taken as the Beatles filmed promotional clips for their latest single, "Paperback Writer"/"Rain" in Abbey Road's spacious Studio One. Robert Whitaker perhaps took all of these photos, as one of his from this session famously graced the back cover of the Revolver album (a black & white shot similar to photo ten).

In order to meet the demands for television appearances and still have adequate time to progress in the studio, the Beatles began the process of filming promotional clips to send to various media outlets in November of 1965. The promos filmed on May 19, 1966, were directed by Michael Lindsay-Hogg, the beginning of many Beatles projects in his oeuvre. First on the agenda for the day were two color promos created especially for The Ed Sullivan Show, beginning with "Rain," where John and Paul don dark jackets that are later removed for the "Paperback Writer"clip. John also switches sunglasses from a larger orange-tinted pair to smaller yellow-tinted granny glasses, similar to those worn by Byrd Jim (Roger) McGuinn. Also evident in the clips is Paul's chipped front tooth, the result of an earlier moped accident. Later in the afternoon, the Beatles filmed an intro for the Sullivan clips, where Ringo explains that they have been too busy with "the washin' and the cookin'" to visit personally.

After a break for lunch, several monochrome promos were shot for the UK market, including Goodbye Lucky Stars and Ready, Steady, Go! Although these promos would adequately serve the purpose of promoting the single, the Beatles and Michael Lindsey-Hogg must have thought something else more creative was in order for this particular single. The following day, the Beatles were filmed at Chiswick House and Gardens in London; these promos were sent to Top of the Pops. Although they were filmed in color, they were broadcast in monochrome. To make up for this, the Beatles made a surprise live appearance on the show later in June.

As I was preparing this particular entry, I thought quite a bit about the absence of an Apple authorized Beatles promo collection DVD. As evidenced by the Anthology project and the promotion surrounding the 1 greatest hits collection, the promos have been restored to absolute pristine condition. It is such a wasted opportunity--these classic clips should be available for every Beatles fan to purchase and enjoy. I am glad that the Beatles Rock Band video game will be available for fans, but I honestly think that a promo collection (including those great "new" clips developed for various projects), the promised remasters, a Shea Stadium DVD, the Let It Be DVD, etc. are far more important projects for Apple to spend time and money on developing. I think most fans would agree. (The Beatles aren't the only band failing in this regard--the Rolling Stones have such a treasure trove of clips and concerts that should be officially available as well!)

References: That Magic Feeling: The Beatles Recorded Legacy Vol. 2 by John C. Winn; The Beatles - 365 Days by Simon Wells
Posted by child of nature at 5:36 PM

thank you very much

Thank you so much! your photos and write-ups are the best, I love your site!

Definitely, what I wouldn't give for properly released bootlegs and concert footage and videos as beautiful as "Strawberry Fields" and "I am the Walrus".

Also, the footage of John walking around Central Park, NYC in the "Mind Games" video. I think Yoko Ono bought the 19-hour video at an auction, it needs to be shown to the world.

Paul has a fat lip and scar from his motorcycle mishap.

Here's a nice supplement to your Fab fotos, dahlink, from Tony Barrow (PDF only, page 2).

You may want to link to this ever expanding site, Mizz Haze.
http://krlabeat.sakionline.net

Great post, I love their look in '66. Great commentary too...

It's amazing when you realize that Paul sang all of Revolver with a chipped tooth - and there was no whistling on the tracks!