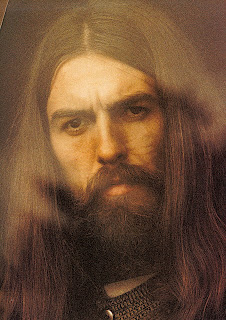 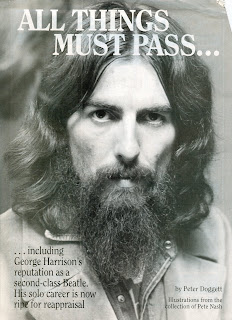 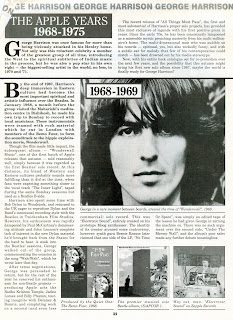 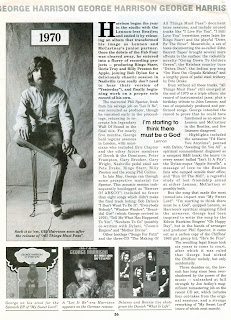 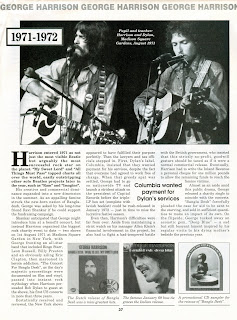 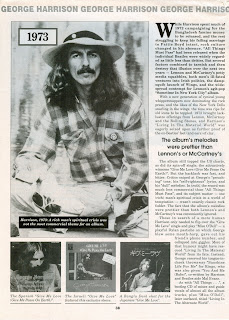 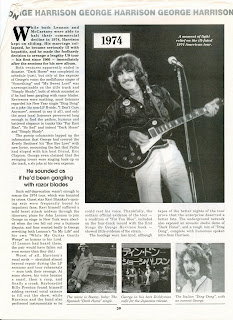 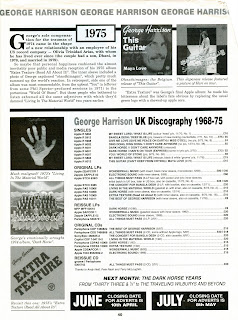 Sitting as the noonday sun
Shines high up in a clear blue sky.
While warming me I drift away
No mem'ries of the times gone by.
Oh, the moment that I lose my mind,
You come into my heart and say
"I'm always here for you to love,
Surrender to me, let me stay."

Sinking deeper still inside,
I feel awakened from my dreams.
Resting in some golden flow,
Becoming part of you it seems.

Nothing separates my life
From that which we have called our goal,
It's all in this external world
As results from deep within my soul.

As I open up my eyes,
The sky has changed into a glow.
My sense of time had disappeared,
I see the sun has sunken low.

I feel such joy and call your name,
You're ev'rything my eyes could see.
I'll gladly kiss it all goodbye,
Stay ever in your company.


To celebrate the extraordinary life and musical career of George Harrison, I've posted scans of the first installment of a Record Collector retrospective, published in the April 2001 issue (given to me by my friend Jeff). It is so hard to believe that we've seen seven years pass since George left the material world.

Reflecting on George's solo career, I find that many gems are buried on obscure releases, such as the song whose lyrics are presented above. Originally intended for the rejected Somewhere in England, "Sat Singing" did not see official release until Genesis published the very expensive books, The Songs of George Harrison, including CDs of previously unreleased songs. Other rejected Somewhere in England songs made their appearance here, including "Lay His Head" and "Flying Hour," both of which are gorgeous songs and among my favorites in the Harrison canon. These three tracks were also remixed in 1987; I prefer the original 1980 mixes, which can be found on numerous bootlegs. In my opinion, George's original SIE album is stronger than what was eventually released. I find the lyrics to "Sat Singing" to be representative of George's vision and goal for his life--to become one with God, at peace within himself.

Another essential Harrison release that has been out of print for many years is Best of Dark Horse 1976 - 1989, which includes the hard-to-find singles and B-sides such as "Cheer Down," "Cockamamie Business," and "Poor Little Girl."Another of my favorite George tracks is "Horse to Water," included on Jools Holland's Small World, Big Band album. Sam Brown did such a fantastic version of this song at the Concert for George; unfortunately, her performance didn't make the cut for the official CD (at least it's on the DVD).

I hope that Olivia and Dhani see fit to reissue and expand the Best of Dark Horse, and include those songs that were on the discs that accompanied the Genesis books, as well as "Horse to Water."

As I type, I'm listening to George with his hero, Carl Perkins, singing and picking "Glad All Over." I can't help but smile.
Posted by child of nature at 1:14 PM

I have been visiting this blog regularly for some time, and I truly appreciate the time and effort you put into it because I love looking at it. Though this post is obviously dedicated to George, another wonderful man, your blog is my first stop for beautiful pictures of John, my favorite musician and one of my favorite people.

Thank you so much for your comment! I am very glad that you enjoy your visits here. It means a great deal to receive positive feedback such as this--it helps keep me motivated, knowing that the blog is bringing happiness to others.