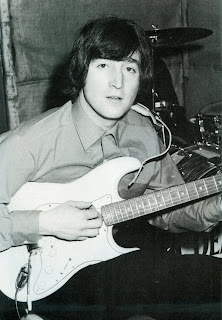 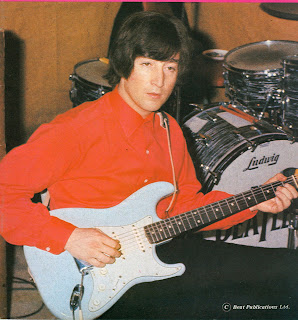 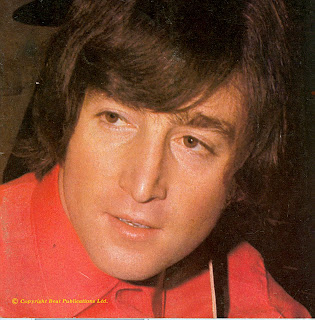 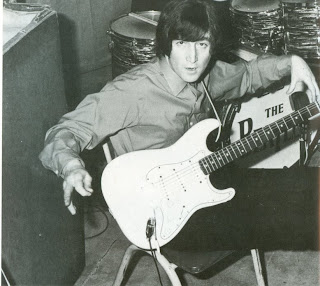 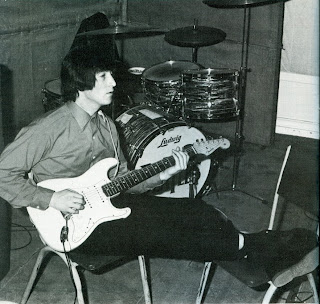 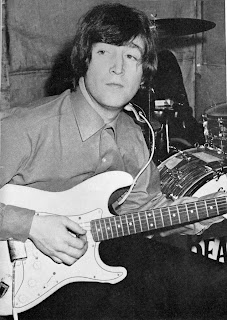 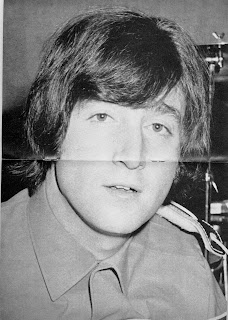 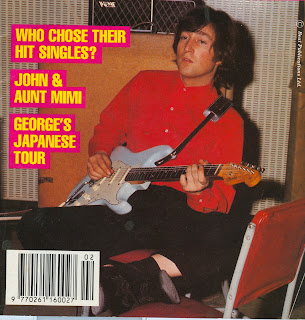 In February of 1965, Beatles Monthly photographer Leslie Bryce captured the Beatles rehearsing for the recording of the Lennon composition, "Yes It Is." During those sessions, John was photographed with his brand new sonic blue Fender Stratocaster. John and George had recently dispensed Mal Evans to procure two Strats for them, and he returned with these gorgeous guitars. Apparently, George had been displeased with the guitar sound he was getting from a Gretch through a Vox amp and was eager for a change. These were the first Fenders owned by the Beatles.

These Strats were also used on the recordings of "Ticket to Ride," "Nowhere Man" and other Rubber Soul tracks, as well as the Sgt. Pepper album. George nicknamed his Strat "Rocky" and gave it the full psychedelic treatment by painting it in vibrant colors (even using a bit of Patti's green nail varnish). He can be seen playing it during the Our World broadcast of "All You Need is Love" and the Magical Mystery Tour film.

Speaking of guitars: Last weekend I was in Nashville for the Fab Four Fest on Cannery Row, and a filmmaker by the name of Seth Swirsky served on a panel, promoting his new film A Year in the Life (which looks fantastic, by the way). The teaser from the film produced a revelation for gear heads such as myself. A few years ago, George's Gibson SG Standard (which he had given to Badfinger's Pete Ham, who subsequently gave it to his brother) went for over $400, 000 at auction to an anonymous bidder. The film revealed that Indianapolis Colt's owner Jim Irsay was that winning bidder.

I'll post more about the Fest at a later date...

(Reference: Beatles Gear by Andy Babiuk)
Posted by child of nature at 6:07 PM