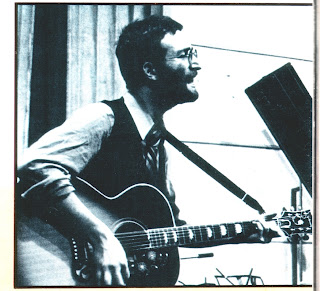 Thanks to my good friend Jeff, I now have the above picture of John singing and playing a gorgeous Gibson J-200 flat top jumbo, just like the one George began using during the White Album sessions. Like the Gibson Hummingbird, this model, with its flower designs on the pick guard, is the stuff of legend. Country bumpkin Bob Dylan can be seen proudly holding what is rumored to be George's own J-200 on the cover of Nashville Skyline.

(Jeff kindly gave me his copy of the 1978 edition of The Beatles: An Illustrated Record by Roy Carr and Tony Tyler--a respected and sought-after book--and this is where I found the above photo.)

Earlier I watched a fascinating documentary on the history of Gibson guitars, so I felt inspired to scan this rare photo of John for the archives. (What John in wearing here shows where Sean received his fashion sense--I've seen recent photos of Sean in the same attire!) I have also been listening to the No-NR CD version of John Lennon/Plastic Ono Band while scanning and reflecting on the events of the past two days. I don't think this photo of John, with his newly shorn hair, is actually from the POB sessions, however. He cut his hair in February of '70, and the POB sessions didn't begin until September. This could be around the time of "Instant Karma!" though, so just ignore the filename I gave the photo!

This blog is also a personal one; I'm usually inspired to write my entries and reveal a bit of myself through my musings on the Beatles, Lennon, or music in general. Currently, I am very disappointed in someone I once held in high regard--a person I felt a real connection with, someone I thought would always be a friend. I feel very betrayed and (actually) shocked that this person would hurt me in such a fashion. We all experience deception in our lives, so this is nothing new, and it could have been much worse. Things have a way of working out, and I realize finding out now instead of further down the line is really a positive thing.

That's a great pic and a great guitar. I have that book and have spent many a night looking at that particular pic. You're right...it could be Sean now!

Do you have any pictures of John actually during the POB sessions? If you do i'd be most grateful if you posted them